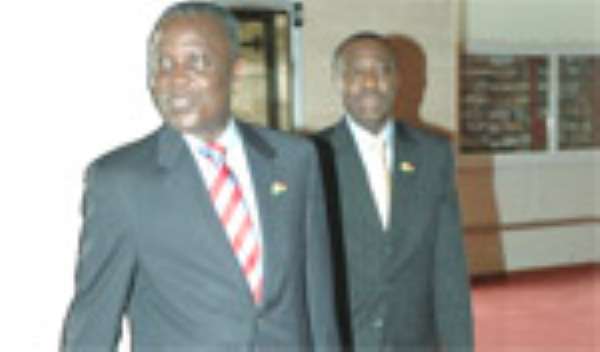 THE MINISTER of Finance and Economic Planning, Kwadwo Baah-Wiredu yesterday presented to Parliament the last budget of the Kufuor Administration (2008 budget), dubbed 'A Brighter Future Budget'.

Mr. Baah-Wiredu, who spoke for one hour and fifty six minutes, said the main focus of the budget was to consolidate the economic gains made so far and strive for more progress.

As usual, the budget covered every major sector of national life such as education, agriculture, sports, industrialization, tourism, employment and energy.

The Minister structured his presentation under four main sections. The first looked at the implementation and achievements of the 2007 budget while the second part considered next year's budget target and outlook. Policy initiatives and the implementation challenges of the budget were considered in the third and fourth sections respectively.

“In line with the Growth and Poverty Reduction Strategy (GPRS) II, government's priorities for the 2008 budget will focus on facilitating growth and reducing poverty through major infrastructural development,” he said.

The Minister, who had a mug full of cocoa drink by his side as he spoke, announced that emphasis would be placed on the provision of roads, water and energy.

“In support of GPRS II, government is taking into consideration, the derived objectives of integrating rural and urban economies as well as ensuring lower transport costs through the provision of safe and reliable road infrastructure and services.

“Government will fund all 166 districts to construct and tar 15 kilometers of roads in the district in the course of the year. The criteria for the selection of the roads will be developed by the end of this year so that implementation of the programme can start at the beginning of 2008,” he stated.

A projected amount of GH¢ 199,200,000 had been allocated for the programme. In addition, banks and other financial institutions would be encouraged to pre-finance and government would later pay.

“An amount of US$200 million from the US$ 750 million sovereign bond will be used for the road sector including the dualisation of the Accra-Kumasi highway.”

According to Mr. Baah-Wiredu, similar measures would be carried out in the water, energy, agricultural and educational sectors.

On the 2008 policy initiatives, he announced that an initiative would be launched to strengthen the regulatory environment of doing business to promote private sector-led growth.

“Specifically, the initiative will focus on simplifying the current regulatory regime applicable in Ghana, reviewing the functions of regulatory agencies to remove overlaps, scale down on the number of regulatory authorities and establish benchmarks for good practices.”

To bridge the development gap between Northern Ghana and the South, the Finance Minister announced that government was preparing a medium to long-term development strategy “that will transform the economy and society of Northern Ghana to ensure effective utilization of the region's competitive advantages in food production, adding value to agro-processing, boosting private sector confidence and improving incomes and general living conditions.

“In the interim, government has earmarked an amount of GH¢25 million as seed money for the establishment of a Northern Ghana Development Fund, and will encourage development partners to contribute to it.”

Mr. Baah-Wiredu, also the Member of Parliament (MP) for Asante Akyem North, however conceded that notwithstanding the sterling economic success of government, there still remained some challenges ahead.

They included maintaining debt sustainability as part of debt management strategy, public sector reform and high wage demands, and the unpredictability of fuel prices and supply constraints in power.

“Though Ghana is performing creditably well in most of the Millennium Development Goals, the target of reducing under- five child mortality rate continues to pose a major challenge.

“Reduction in poverty levels has been found to have a direct positive impact on reducing under-five mortality rates.”

He stated that the Ministry of Health had been focusing on those areas to identify the causes of “this stagnation to guarantee that appropriate interventions are implemented to ensure that Ghana by 2015, achieves the goal of reducing by two-thirds, the under-five mortality rate and maternal mortality”.

The Finance Minister assured the nation that government would ensure that the necessary financial discipline which characterized the 2004 general elections would be maintained in next year's.

“The Fair Wages and Salaries reform process is ongoing and the major challenge is managing labour expectations especially in an election year.”

The Minister ended on a reassuring note that there was so much hope for the future as far as the nation's development was concerned.

To achieve the nation's dreams, he called for effective time management, and urged all to “rededicated ourselves in achieving our dreams as a nation.

“We signed a social contract with this nation the day we were born. If we do this, we can face the future with hope because the future is bright. The money is there for the future.