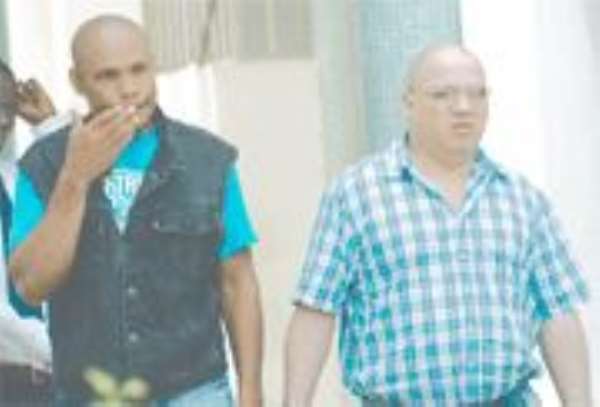 Three Venezuelans were have been sentenced to a total of 70 years imprisonment with hard labour by the Accra Fast Track High Court for importing 588 kilogrammes of cocaine into Ghana.

Two of the convicts, Joel Meija Duarte Moises, a machine operator, and Italio Gervasio Rosero, alias Italio Cabeza Castillo, a businessman, were sentenced to 25 years and 20 years imprisonment, respectively, after nine prosecution witnesses had given evidence against them.

The third convict, Vasquez Gerado Duarte David, alias Bude or Shamo, was, however, sentenced in absentia because he has been on the run ever since Moises and Castillo were arrested at East Legon in Accra on November 24, 2005.

Moises and Castillo are to serve their sentences with effect from November 24, 2005, the day of their arrest.

The court, which took into account the quantity of cocaine seized before passing judgement, said the activities of cocaine dealers were unacceptable because they were tarnishing the image of the country.

The trial judge, Mr Justice E. K. Ayebi, described the defence put up by the convicts as “contradictory and full of lies” and further held that the prosecution had proven its case beyond reasonable doubt.

The court ordered that the convicts be repatriated immediately they completed serving their sentences.

It also ordered that exhibits which were used in processing cocaine and which were found in Moises' room should be destroyed, while the cell phones of the convicts be confiscated to the state.

The court also ordered an investigation into how Castillo managed to lay hands on his passport while in custody when he (Castillo) had, from the beginning of the trial, refused to state the whereabouts of his passport.

Castillo bowed his head in shock when the sentence was read out to him by a Spanish interpreter, while Moises looked straight, trying to conceal his emotions.

Citing authorities to buttress the court's decision, Justice Ayebi held that it was not unusual for the prosecution to use circumstantial evidence to prove a charge of conspiracy against an accused person.

The court further held that the totality of the evidence adduced in court proved that Moises “jealously guarded the cocaine. I find the denial of the accused person unacceptable because the key to the room where the cocaine was kept was found in Moises' bedside locker”.

“The accused (Moises) had physical control and access to the drug and thereby instructed the police not to mix the wet cocaine with the dry one when they went to effect his arrest,” the trial judge maintained.

Justice Ayebi described Moises as “untruthful” because it later emerged that Moises was not a guest at East Legon as he (Moises) had earlier stated.

The court further held that it was also not defensible for Moises to claim to have come to the country to purchase gold or diamonds because he (Moises) had informed the court that Vasquez had seized his $15,000 and his passport immediately he arrived in the country.

Turning to Castillo, the judge said he lacked credibility because although he had earlier claimed that he did not know Moises, he later informed the court on oath that Moises lived 10 kilometres from his (Castillo's) house in Venezuela.

The court said it was untrue for Castillo to claim to be staying in a hotel in Achimota because he (Castillo) could not take the police to the said hotel when he was arrested upon entering the East Legon apartment where the cocaine was found.

It said it also emerged that Vasquez's number was found on Castillo's cellular phone, although Castillo had claimed that he did not know Vasquez.

Based on incriminating evidence led by the prosecution, the court concluded that the three had arrived in the country to deal in cocaine and convicted them accordingly.

Counsel for the convicts, Mr Kwabla Senanu, had earlier prayed the court to temper justice with mercy, as well as take into account the number of years the convicts had spent on remand.

According to him, Castillo was a father of four, whose wife had threatened to divorce him because of the cocaine trial, while Moises was also a father with young children.

Replying, the acting Director of Public Prosecutions, Ms Gertrude Aikins, prayed the court to consider the ill behaviour of the accused persons before passing judgement.