Yayha Jammeh to be isolated 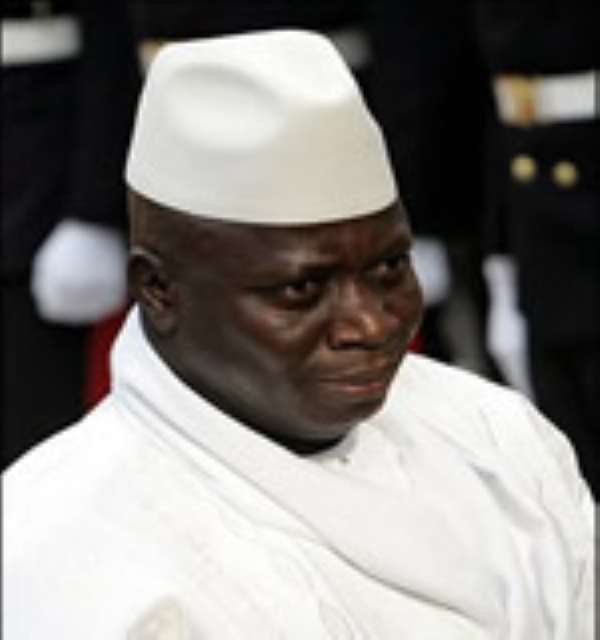 According to Prof. Kwame Karikari of the Media Foundation for West Africa (MFWA), the move that is expected to have the blessings of the ECOWAS, the UN and all stakeholders in other parts of the continent, will ensure that any country or organisation that does any direct business with the Gambia President is suspended, citing his disregard to rule of law and human rights.

The isolation is expected to include a ban on traveling outside his country.

Leading a discussion on the attitude of the Gambian leader towards parties that have suffered alleged abuses from his regime, Prof.

Karikari also made a passionate appeal to the Ghanaian media to wait on parliament to ensure that Yahya Jammeh comes out with clear answers on the forty something Ghanaians who were murdered in cold blood in The Gambia.

A communique that followed the Gambia Strategic Meeting in Accra with collaboration from a Gambia Task Force based in Ghana, the Commonwealth Human Rights Initiative and the West Africa Bar Association, Prof. Karikari recalled an announcement by the Gambian government in March, 2006 announcing its success at thwarting a coup attempt.

Following that announcement, he said, numerous Gambians were detained and tortured, before being released without charge while others disappeared under suspicious circumstances.

According to him, Jammeh's attempt to develop his country to become the biggest tourist centre is an apology of what it has become today - a personal zoo from which he derives his vast income.

The communications don said stakeholders had agreed to take civil and criminal action against the Gambian authorities and Yahya Jammeh before local Gambian courts and regional judicial institutions like the ECOWAS Community Court, African Commission on Human and People's Rights among others.

He said members of a fact-finding mission of Amnesty International and local journalists in that country who were to assess the human rights situation were apprehended in October and charged as spies.

The local journalists fled the country following persistent threats from officials of their intelligence system, the National Intelligence Agency (NIA).

According to Prof. Karikari, the objective of the coalition is to create awareness about the human rights situation in The Gambia in order to solicit support for the application of pressure on the Gambian authorities to respect the rights of its citizens.

Commonwealth Human Rights Initiative (CHRI) representative, Nana Oye Lithur, said over the years CHRI and Africa Legal Aid have been working on human rights issues and violation associated to The Gambia and on the killing of the Ghanaians and other Africans in The Gambia.

She reiterated the resolve of MFWA and Media Rights Agenda (MRA) to work on issues of press freedom which is under siege in The Gambia and has led to the murder of leading opposition journalists as others disappear, “so we have decided to come together to create a network to adopt strategies and implement activities to ensure that human rights of Gambians are protected.”