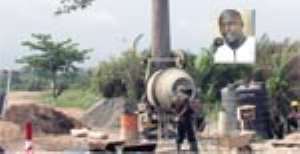 From all indications, the end of the road has come for the controversial witch tree whose felling would make way for a road construction project.

This milestone was reached following the decision by the Ghana Highway Authority (GHA), the supervising agency of the dualisation project of the Achimota/Ofankor road, to settle the demands of the local chiefs and elders at Ofankor yesterday.

Although the exact amount was not disclosed, DAILY GUIDE learnt that a whopping ¢70 million changed hands.

The figure was reached after intensive negotiations involving state officials, the national security apparatus and officials of GHA.

The Ofankor Chief, Nii Abban Kortei II, the Chief Linguist, Nii Ashietey Tetteh and the elders, in a correspondence dated October 29, 2007 to GHA, demanded three cows, three sheep, six fowls, 12 tubers of yam, a gallon of palm oil, six tins of maize, a carton of schnapps, a carton of whisky, two drums of akpeteshie, 'kpele', and asafo drums, in addition to ¢100 million cash, to perform what they called 'olila' rituals before allowing the felling of the tree.

After negotiations however, the amount was reduced.
Earlier, DAILY GUIDE learnt that GHA offered ¢20 million, which was quickly rejected by the chief and his elders, who claimed that the amount had to be shared among the 43 villages under the Asere Stool.

A source told DAILY GUIDE that the amount offered was intended to cover all the demands made by the stool.

Meanwhile pacification of the spirits was said to have begun from Pokuase and heading towards the Ofankor grove where the final rituals would be performed to precede the felling of the witch tree.

The paper learnt that the Ofankor elders said they would need three nights to finish with all the rituals, after which the tree would go.

On Wednesday October 24, a Nigerienne witch hunter, who goes by the name Prof Sabo Azeez attempted felling the tree and attracted the ire of the youth and elders of Ofankor, who questioned his authority to trespass their shrine.

The Onyina tree was said to harbour three marine spirits- one male and two females- and that no man born of a woman could fell it.

This prompted Sabo Azeez to carry on with the felling process - which action attracted the anger of the youth who bundled him to the chief's palace where he was fined.

Workers of the Chinese firm working on the project were not spared the stone-throwing by the angry youth.

At the Tesano Police Station, where the matter went afterwards, they were asked to seek an amicable solution with the chief and his elders.