Cop Was killed In Awadada’s Palace 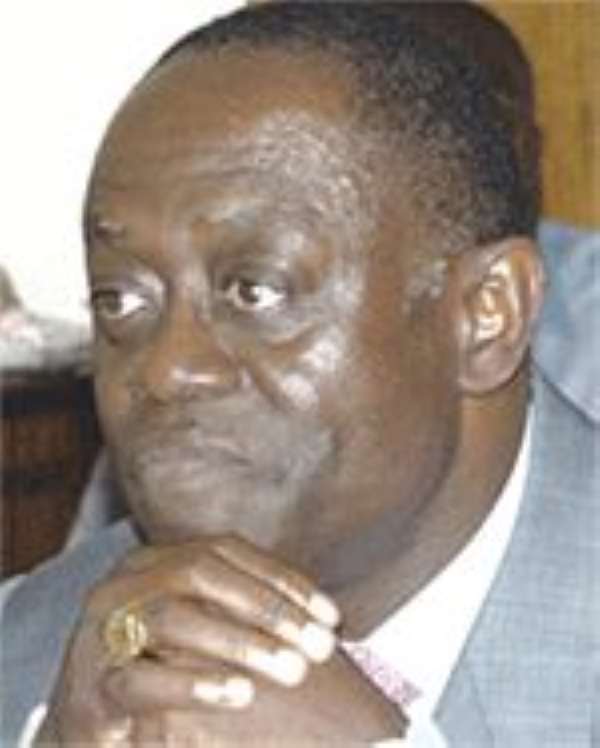 Initial police investigations seem to suggest that the policeman who was killed during the Anlo chieftaincy conflict may have been killed in the palace of the Awadada, one of the leaders in the dispute, the Interior Minister, Kwamena Bartels, told Parliament yesterday.

He said the policeman was allegedly kidnapped from the environs of the Yorxoenu Shrine and taken into the palace of the Awadada where he was allegedly murdered and dumped in a nearby lagoon.

Mr Bartels made these disclosures in a statement to Parliament on the situation in the Anlo Traditional Area.
“Mr Speaker, police investigations have found blood stains on the walls, gates and sitting room of the Awadada Palace and specimen of these have been taken by the CID for forensic examinations to determine whether it is that of the murdered police officer,” he said.

Briefing the House about the incident, Mr Bartels said that it had come to the attention of the government that the police allegedly stood by, allowing the Torgbui Sri faction of the kingmakers to proceed with the selection, confinement and installation of an Awoamefia for the people of Anlo in spite of a court injunction on the issue.

“I would like to place on record that this is far from the truth, since, as far as the police were aware, there was no such court order,” he said, explaining that what was on record was an Order of Substituted Service granted by Justice G.K. Adzagli of the Ho High Court.

Mr Bartels explained further that the order granted the authority for service of a writ of summons and statement of claim and other processes to be effected on Togbui Sri III and others.

He said what that showed was that there was no injunction restraining the holding of a purported “cultural festival” spanning five days or the confinement and installation of an Awoamefia for the people of Anlo.

The minister stated that as a result of the government's actions, particularly the security measures taken and the appeal to the traditional and opinion leaders, among others, the situation was relatively under control.

He, however, added that the government would continue to monitor the situation and review the measures already taken to ensure that the freedom of the people was not curtailed.

Mr Bartels said the situation in the Anlo State should be a matter of concern to all, adding that it was crucial that all suspicions were set aside for the unity of the area in particular and the country in general.

“This is not the time for the politicisation of these very delicate issues.

It is time to unite to deal with the situation,” he said and reiterated the government's stand that the issue of who was the rightful heir to the Anlo Paramount Stool should be settled through the constitutionally-recognised structures.

“The government would also like to reiterate its position on non-inteferance in chieftaincy affairs but with its over-riding responsibility of ensuring law and order, it would ensure that the full rigours of the law would be brought to bear on any individual or group of persons whose actions will lead to breach of peace,” the minister warned.

Contributing to the statement, the Member of Parliament for Anlo, Mr Clement Humado, said in September, this year, one of the factions in the chieftaincy dispute applied for a permit to install an Awoamefia, but their request was refused.

“It was therefore unfortunate that a month later, the Inspector-General of Police (IGP) gave a permit for a five-day cultural event to the Regent Sri III faction which was used to confine and install him as an Awoamefia,” he said.

He stated that the justice system should have been allowed to travel its full course before granting a permit for the performance of any cultural event spanning five days, adding that the current situation would have been avoided if public officials had exercised the necessary caution.

He complained about the mode of arrest by the police and said that their actions had eroded the confidence the public had in them constituting a neutral institution.

Mr Humado called for the provision of more resources, including a lawyer, for the Volta Regional House of Chiefs to enable it to play its part in the resolution of the problem.

For his part, the Minority Leader, Mr Alban Bagbin, called for a motion to be brought before the House to enable the MPs to pass a resolution for the institution of an independent commission of inquiry in conformity with Article 278 of the Constitution.

He called for the withdrawal of the police keeping peace in the Anlo area so that they could be replaced with the military “since the police are not seen as being impartial”.

Mr Bagbin also said that the actions and utterances of the Volta Regional Police Commander had portrayed him as someone meddling in politics and called for his immediate transfer from the region.

The Majority Leader and Minister of Parliamentary Affairs, Mr Abraham Ossei Aidooh, while expressing the condolences of the House to the bereaved families, suggested that the issue of succession to the various skins and stools be documented to forestall claims and counter-claims when they became vacant.