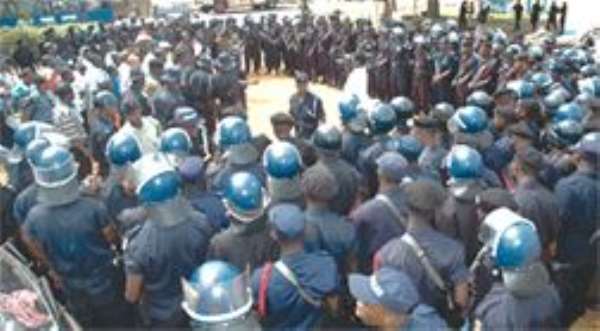 The Awoamefia Stool Secretary, Mr Napoleon Agboada, has announced that a new Awoamefia for the Anlo Traditional Area, known as Togbui Sri III, has been installed and introduced.

A press statement to that effect was issued last Saturday, barely 24 hours after the Fast Track High Court in Accra had restrained the kingmakers of the area from installing Francis Nyonyo Agboada, alias Regent Togbui Sri III, as the Awoamefia.

The court order, said to remain in force until further notice, followed the granting of an ex-parte motion tabled before the court by the Attorney-General and Minister of Justice, Mr Joe Ghartey.

The stool secretary, however, said in the press statement that "at the time of the installation of Togbui Sri III, in the early hours of Friday, November 2, 2007, there was no restraining order or Executive Instrument announcement as some media houses tend to portray".

He said the restraining order was belated and did not, therefore, have any effect on the installation of the new chief.

It stated further that “a coronation date will be announced later”.

Mr Ghartey had prayed the court to restrain parties in the preparation and installation of Togbui Sri III because the circumstances surrounding the installation, which had already claimed some lives, could lead to more bloodbath.

But in Saturday's statement, Mr Agboada said “the final confinement rites have been performed and the new Awoamefia, known as Tobgi Sri III, has accordingly been installed and introduced at the Central stool house and Agorwoxonu at Anloga.

The statement said following the unfortunate incident that occurred when three persons and a security man lost their lives and consultation with “Fiagawo” under the Anlo Traditional Council, an emergency traditional council meeting would be convened on November 13 in Anloga to discuss the issues and make representations to the government.

The release of the statement coincided with a visit by a high-powered government delegation to announce an Executive Instrument banning the possession and the carrying of firearms in the Anloga, Keta and surrounding areas.

The Minister of Interior, Mr Kwamena Bartels, who announced the government order said, “We must do everything to forestall another explosion”.

He gave the order when a ministerial team, made up of himself, the Minister of Defence, Mr Albert Kan Dapaah, the Minister of Justice and Attorney -General, Mr. Joe Ghartey and the Volta Regional Minister, Mr Kofi Dzamesi, paid a visit to the Anlo area to ascertain first-hand the information on the situation on the ground following clashes triggered by activities in connection with the installation of a new Awoamefia of Anlo, which led to four deaths last Thursday.

Addressing police personnel deployed to the scene, Mr Bartels said that the crisis at Anloga was not over and that the security personnel must be vigilant in order to ensure that a volatile situation did not ensue.

He expressed sympathy and regret over the death of one of their colleagues but urged them not allow that situation to result in emotional imbalance that would affect their professional duties.

“I appreciate the professional manner in which you have handled the riot, for in spite of the death of one of your colleagues, you have conducted yourself very professionally,” he said.

Mr Bartels asked them to do their best to ensure that peace, tranquillity and stability returned to the area.

Addressing the military contingent stationed at the area, the Minister of Defence, Mr Kan Dapaah, stressed that the greater number of residents of the Anlo area were law-abiding citizens and therefore the security detail should take that into consideration when dealing with the people.

“The way we handle the people is very essential. Let us have this in mind as we go about our duties,” he stressed.

He assured them that all their logistical constraints would be taken care of for them to be able to effectively perform their functions to bring the situation in the area to normalcy.

Briefing the ministers, the Keta District Chief Executive, Mr. Edward Ahiabor, assured them that currently, there was “absolute peace and calm” in the area but expressed worry about the aftermath of the situation, saying there was the likelihood of “people jumping on each other”.

He therefore requested that when the situation normalised, some security personnel should be asked to remain on the ground until the tension was totally dissipated.

Mr Ahiabor also said that there was not enough money to cater for the scores of security men that had been brought to the area and therefore called for central government financial assistance in taking care of them.

The Deputy Volta Regional Police Commander, ACP Alhaji Hamidu Mahama, said that the 90 suspects who were picked up last Friday had been pruned down to 74 who were currently at Ho and added that the interrogation process was being expedited to ensure that those who were innocent were quickly released.

He said the morale of the police personnel, which waned considerably as a result of the killing of their colleague, had risen significantly.

The ministerial team also paid a visit to the Keta Government Hospital where they interacted and sympathised with those who got wounded during the riot.

Meanwhile, the curfew that was imposed last Friday took effect last Saturday from Whuti through Anloga right down to Keta.

At 6pm, there was no sign of people in town. All social activities had halted in absolute compliance with the government directive.

However, because of the construction of the Aflao-Akatsi road, most vehicles had to divert through Keta-Anloga to Dabala junction and the security personnel had mounted road blocks and thoroughly were searching all vehicles, including the one that the 'Daily Graphic' reporters were travelling on.

Some vehicles returning home to Keta which could not beat the 6 pm deadline were escorted to their destinations by the Deputy Regional Police Commander, ACP Alhaji Hamidu.