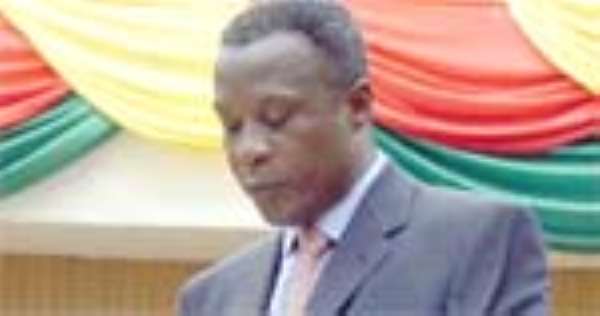 The Justice Samuel Glenn Baddoo Committee set up to investigate reported cases of extortion and other operational irregularities at the Customs, Excise, and Preventive Service (CEPS), has confirmed that as many as 13,000 vehicles plying the nation's streets have been registered with fake documents, stressing that the Department of Vehicle Licence Authority (VELD) has questions to answer.

The committee, after sitting for 41 days, presented its preliminary report to the Minister for Finance and Economic Planning, Kwadwo Baah-Wiredu at a short ceremony in Accra on Friday and noted a number of irregularities in the clearance of imported cars.

The committee findings confirmed DAILY GUIDE's reports on irregularities in the clearance system, culminating in the setting up of the Glenn Baddoo Committee, which incidentally barred the paper from its sittings.

“It came to light that regulations on auction sales were not followed. DVLA must have some close connections with CEPS because many vehicles were brought in uncustomed,” said Justice Baddoo, a retired Supreme Court judge.

The fact-finding committee further noted that “Auction sales by the auction team were a charade, a pretence, and a huge joke. This practice clearly indicates corruption as well as abuse of the auction process, which ultimately results in huge losses of revenue to the country.”

It recommended that apart from strengthening and motivating a task force to carry out the seizure of uncustomed vehicles, all DVLA branches should be connected to the GCNet.

The findings indicated that there was evidence that thousands of mobile phones and accessories were smuggled into the country.

The Justice Baddoo committee said it took evidence from 52 witnesses, and expressed the worry that CEPS had a lot of image problems due to the misdemeanor of a few officers.

It therefore recommended that existing disciplinary measures in the service should be rigorously enforced.

Responding, the Minister, Hon. Kwadwo Baah-Wiredu recalled how he was bombarded in New York with questions over reports of corruption at CEPS, and appealed to all revenue agencies to take steps to redeem their image.

He also appealed to the general public to refrain from corrupting revenue officials, lamenting that “It is a two-way traffic. I think the shortcuts are too many.”

The chairman of the Revenue Agencies Governing Board (RAGB), Osei Kwabena, pledged to do everything within his power to block all loopholes in the revenue-generating system.

The Commissioner for CEPS, Emmanuel N. Doku, said he was concerned by the image of the service and promised to get it corrected.

“Matters of corruption must be addressed on the table, and not under it. It is time we see the image of CEPS as being intertwined with the national image and indeed all businesses,” he said, stressing that the image problem should be corrected within one year.

Major Ablor Quarcoo, Internal Revenue Service Commissioner, called for a general attitudinal change so that the habit of giving and receiving bribes would be effectively tackled.

The Commissioner for VAT, Anthony Ewuredu Minlah, said the public should report any officer who attempts to extort money from them.
He described the report as a testimony of the resilience of the committee members.

The report vindicates a DAILY GUIDE Investigative Report four months ago on the state of activities at CEPS, notably at the Tema Harbour.

Other members of the committee were E.M. Owusu-Ansah, Mrs. Dorothy Afriyie-Ansah, Michael Ayesy, and Yvonne Atakora-Obuobisa.