MEDIA PERSONNEL TASKED TO DO A PEER REVIEW OF THEMSELVES 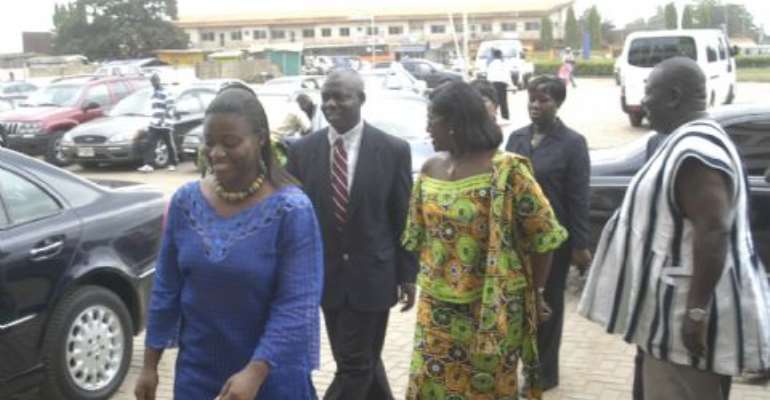 Mrs. Jackie Annan, PRO of Ken City Media, welcoming the Minister and her entourage to the station

“The National Orientation initiative is not a political gimmick, but a conscious attempt to reawaken the lost values of Ghanaians that made us unique as a people.” Ghanaians have thus been called upon to accordingly disabuse their minds of such notions and to collectively embrace the idea to help stem the tide of unpatriotic attitudes among the populace.

Hon. Oboshie Sai Cofie made the remarks when she paid a familiarization visit to some radio stations in Accra as part of her moves to make the government and the media see each other as important stakeholders in nation building rather than foes. This leg of her visit took the Minister to Radio Universe at the University of Ghana campus, Ken City Media, Choice Fm, Sunny Fm, and the Madina market.

At Radio Universe, the Minister expressed her joy at the vibrant growth of the media industry in recent times. Answering a question from Opanin Agyekum, a linguistics lecturer at the university and a popular guest on radio talk shows, she said it is a good thing that local languages are been used on the airwaves. In her opinion, this makes it easier for those who are not lettered in the queen's language to also appreciate the goings-on in the country, and to also have the opportunity to express their opinions on sensitive national issues in their mother tongue.. She hinted that her Ministry is already assisting in the promotion of such an ideal, as it has instituted the translation of vital current national issues into about six local dialects.

Receiving the Minister and her entourage to the glorious ambience of Ken City Media Empire, the Vice President of the establishment, Mrs. Stella Agyepong could not help but show her appreciation of the visit. She said such interactions are commendable because it brings government and the governed closer. The Information and National Orientation Minister said she had been anxious to visit Ken City partly because of the pride and confidence exhibited by its workers anytime they attended functions like 'Meet-the-Press' and others at the Ministry.

Hon. Frank Agyekum, Deputy Minister of Information and National Orientation observed that government has not been discriminatory in the granting of advertisements to media outlets. To brainstorm on this and other pertinent issues, a roundtable conference with the 'Captains of the media industry' is under consideration. The forum shall also involve business magnates.

At the Madina market, the entourage was received by the Chief of Madina, who noted that that was the first time a Minister was visiting the market. He called on the market leaders and the traders to accord the Minister all the necessary courtesies. Also at the Market to welcome Hon. Oboshie Cofie were the M.P for the area, Hon. Alhaji Amadu Sorogo, the Presiding Member of the Ga East District Assembly, Hon. Baba Zakaria, and Chief Superintendent Elizabeth Orlando (Madina District Police Commander).

The executives of the traders' association, led by the secretary, Agnes Owusua appealed to the Minister to use her good offices to impress on the relevant authorities to ensure that hawkers outside the market are made to move into the main market, or be evicted by force. She entreated her colleagues to register for the NHIS, so as to enjoy the benefits. They appealed to the NHIS Secretariat to take the registration exercise to them at the market. This is because most of them find it difficult and virtually impossible to leave their wares to go, queue, and register. She however showed much appreciation at the School Feeding Project.

The NDC MP for Abokobi-Madina said he and his family have all registered for the NHIS. He lauded the School Feeding Programme, Capitation Grant, and free bus ride for school pupils, noting that they have been of immense benefits.

On his part, the Presiding Member said if the traders indeed wanted the situation resolved, they and all other opinion leaders should desist from trying to make political capital out of the situation, as if to create an impression that the government does not care for them. Hon. Frank Agyekum assured the market women that the hawkers shall be ejected from the precincts of the market. He advised them to take advantage of the numerous citizen friendly programes like the NHIS, Capitation Grant, and the School Feeding Programme, and also to share with their family members on the need to patronize these laudable interventions.

The Minister also visited Choice Fm and Sunny Fm. At these places, she cited lack of accuracy in reportage as a major headache to her. She tasked the media to do a peer review of themselves by demanding the greatest level of professionalism from each other. Also accompanying the Minister on her tour were Mr. Kofi Amponsah Bediako (Government Spokesperson on Social Services), Mrs. Catherine Afeku (Government Spokesperson on Infrastructure), Mrs. Anthony (Media Liaison at the Ministry), and Hon. Nii-Bi Ayi Bonte (a former M.P for Odododiodio).
BOAKYE-BOATENG PRINCE

Reopening Of Schools: Not Testing Students, Staff Dangerous,...
28 minutes ago