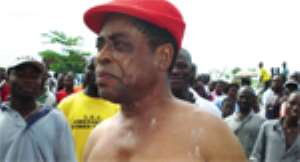 The chiefs and elders of Ofankor in the Greater Accra Region are demanding a whopping ¢100 million and assorted items, also running into several millions of cedis, from the Ghana Highway Authority (GHA) before they will permit the felling of a 'witch tree' for an on-going road construction.

According to a letter dated 29th October, 2007 and signed by Nii Ashitey Tetteh, Chief Linguist of the Asere Traditional Council of Chiefs and Elders, the 15 items, which would be needed for the performance of 'Olila Rituals', must be ready not later than November 5, 2007.

The witch tree would have to be cut to pave way for a Chinese company to go ahead with construction works on the Achimota-Ofankor section of the Accra-Nsawam highway, but residents protested strongly when the contractors started felling it, claiming it had a great deal of spiritual significance for them.

The irate youth who claimed that the tree, far from being a base for witches, was a shrine, attacked one Nigeriene involved in the felling process, and slapped him several times before eventually dragging him to the chief's palace, accusing him of committing sacrilege.

They did not understand why Amidu Sabo Azzez, a foreigner, should trespass that far into their holy shrine, and vowed that the 'gods' of the area would have to be pacified before the road construction would proceed.

The incident had stalled construction works on the Ofankor/Achimota road project.

According to the Chief Linguist of the Asere Stool, Nii Ashietey Tetteh, the place where the Onyina tree stood was once a shrine, harbouring the gods of the land.

At the time of the fracas, the aggrieved Chief Linguist explained that over the years, the elders of the town had spent a lot of money appeasing the 'gods' in order to stop the rampant motor accidents that were recorded at the spot.

According to him, as a result of the fatal accidents, the elders consulted an oracle, which advised them on what to do.

This information, he continued, was communicated to the office of the Greater Accra Regional Minister and other relevant institutions, alleging that the fatal accidents ceased soon after the performance of the prescribed rituals, which he noted, ran into several millions of cedis.

Some of the residents of the town who spoke to DAILY GUIDE claimed that three marine spirits- two females and a male- were inhabiting the tree as a result of which previous attempts to cut it down had proven unsuccessful.

They hinted that five chainsaws had broken down in such attempts, contending that nobody could fell the tree.

According to them, although they supported the felling of the tree to allow for the construction of a road through the location, this should be preceded by a consultation with the chief and elders of the town.

Interestingly, when the matter was reported to the Tesano Police, the Divisional Commander, Mr. Duku, asked the Ghana Highway Authority official, Mr. Acquah, to cooperate with the youth and traditional authority in performing whatever rites they have prescribed.

What was not clear however, was whether the extra cost of 'purification' on a single tree, running into hundreds of millions would be borne by the contractor or the government of Ghana, more so when funds had already been budgeted for the project.

REVENGE: A lady got pregnant by her sister’s husband who was...
53 minutes ago