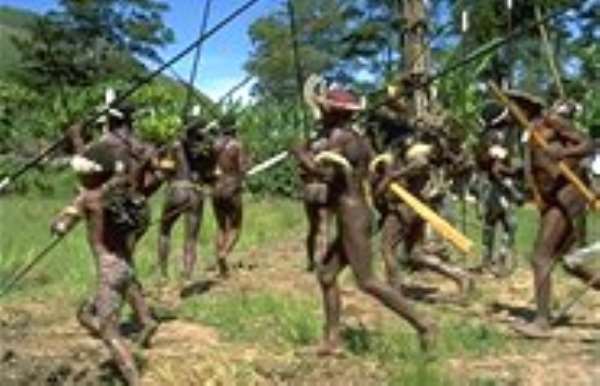 The central government, investors in palm oil plantations and timber companies need to know that deforestation is and will be rejected by indigenous Papuans from 252 different tribes living in the western half of the island of New Guinea.

If the Papuans were consulted, they would say: "Don't cut down our trees."

Under Soeharto's regime, Papuans protesting against the destruction of their ancestral forests by government-authorized companies were simply accused of being separatists or against national development. Protesters were always silenced violently by the military and police, who seemed to love protecting timber companies.

However, the 2001 law on special autonomy for Papua province gives more freedom for Papuans to raise their voices. Papuans, then, have begun to protest against deforestation within their ancestral forests.

The latest example of the rejection of deforestation was demonstrated in September 2007 by indigenous Papuans of the Wate tribe in Nabire regency (Cenderawasih Pos, Sept. 20, 2007).

It was reported members of the Wate tribe strongly opposed a plan by PT Harvest Raya, in collaboration with PT Jati Dharma Indah, to clear thousands of hectares of their ancestral forest to make way for palm oil plantations.

The protesters have demanded the local government of Nabire regency revoke the permission already given to the companies.

The Papuans' rejection of deforestation raises some questions. Why do indigenous Papuans courageously reject deforestation? Is the rejection a reflection of what the central government calls "Papuan separatism"? Is it a manifestation of being anti-government or anti-development, the accusations made by the central government in Jakarta for more than four decades? Is it sign of not wanting to better their future?

The reasons behind the rejection are related to their culture. Their rejection is rooted in and guided by the life-giving values of local culture.

Papuans never see their virgin forests simply as a sea of trees that can be cut down in order to make millions of dollars.

The forest, for indigenous Papuans from all tribes, has multi-dimensional meanings.
Indeed, Papuans never consider the forest as an enemy that has to be eradicated from the surface of the earth. Rather, it is first and foremost a member of the community.

Papuan community is composed not only of living people, but also the dead, the spirits and nature.

That's why each community, both as a tribe and a community within a tribe, always has its own forest within a clearly defined territory.

So, culturally speaking, a Papuan can never be separated from the forest.
It would also be a mistake if Papuan forest was seen as a isolated thing from the Papuans themselves, because the forest and the people form one community.

For Papuans, a forest can mean a living pharmacy that provides all the necessary natural medicines. In times of need, Papuans go to the forest to collect natural medicine.
The forest is also considered a food store or a living supermarket, for it provides vegetables, fruits, fish and animals.

People used to get the necessary materials for houses, traditional boats, firewood and fences in their own forest.

It is a Papuan's belief that their ancestors and deceased members of the community reside in the forest. They are the guardians of the forest, including plants and animals, owned by the community.

The forest, for Papuans, is a living temple, chapel or mosque, where people come and pray. It is the place where all rituals are conducted by a community or individually. Papuans go into their ancestral forest if they want to communicate with the ancestors or the dead.

The deeper sense of forest is expressed in the Papuan saying "Hutan adalah mama" (the forest is our mother).

The forest is respected as a mother who tirelessly cares for, protects and sustains all of the members of the community, including the animals.

Papuans cannot imagine life without the forest. Emphasizing the deeper meaning of forest, they say "Hutan kita, hidup kita" (our forest, our lives).

It is for the sake of life that every Papuan is educated from childhood the importance of maintaining a correct relationship with the forest.

We can now understand that deforestation, for Papuans, means destroying a living pharmacy, damaging the living supermarket, destroying the place of worship, expelling the ancestors and the dead and committing adultery against the mother forest.

Deforestation, then, will bring about suffering, disaster and chaos for Papuans. That's why indigenous Papuans reject deforestation.

Papuans learned the importance of the forest for life neither from the Dutch nor the Indonesian government, but from Papuan cultural tradition.

The cultural concept of forest is handed down from one generation to the next.

The central government should respect Papuan culture, including the cultural understanding of forest, and utilize it to protect the Papua's forests.

By doing so, the government and Papuans could jointly prevent Papua's forests from being lost to deforestation.

Otherwise there will be war between Papuans preserving Papua's forests and the central government proposing deforestation.

The writer is a lecturer at the Fajar Timur School of Philosophy and Theology, in Abepura, Papua.