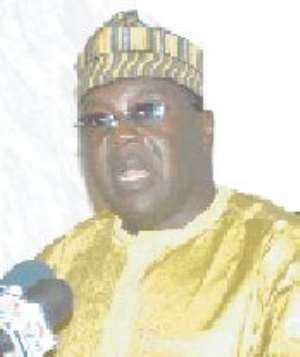 Ghana's Vice-President Alhaji Aliu Mahama, has asked the chiefs and people of the Dagbon Traditional Area to protect the peace in the area, particularly in the flash points, to avert any resurgence of conflict that could turn the clock of development back.

He congratulated them on the able manner in which they had been able to maintain the peace in the area since the conflict ended and assured them that the government was determined to bring more development to the area.

The Vice-President, who made the call when he paid separate courtesy calls on the Regent of Dagbon, Kampakuya-Na Abdulai Yakabu Andani, and the Regent of the late Ya-Na Muhamadu Abdulai, Abdulai Mahamadu, at their palaces as part of his five-day tour of the Northern Region as a sign of the government's commitment, disclosed that the Yendi District had been upgraded to a municipal status.

His visit to the North is the last leg of his tour of three regions of the country which also took him to the Western and Ashanti regions.

Vice-President Mahama said the elevation meant more development and advised the chiefs and people to ensure that whatever misunderstanding existed between them was resolved to enable them to fully benefit from their new status.

He said there was no need for money meant for development projects to be expended on settling conflicts and expressed the hope that the peace that they had embraced would be maintained in the interest of all.

He later inspected the camp of the soldiers deployed to maintain the peace in the area, and on seeing the nature of the tents at the camp, he described them as unacceptable.

He promised to take the matter up when he returned to Accra to have the tents and other pressing needs of the soldiers attended to.

At the palace of the Abudus, the Vice-President reiterated his call on the people to tolerate one another to ensure that peace prevailed at all times.

He said dialogue was key to resolving the volatile situation at hand and pledged the government's support to ensure that lasting solutions were found to the issues confronting them.

The Regent of the Abudus, who spoke through one of the elders of the palace, said the road map for peace needed to be sped up.

He said the youth were getting agitated by the day and noted that something concrete needed to be done to avert anything that could jeopardise the peace.

The Andani Regent, for his part, asked the government to motivate the military personnel in the area by providing them with all the necessary amenities to make them effective.

The two regents wished the Vice-President well in his campaign to become the flag bearer of the ruling New Patriotic Party (NPP), come December when the party would hold its elections.

The Vice-President later proceeded to Chereponi and announced that the area had been made a district.
“You were attached to Saboba but you are now on your own,” he told an enthusiastic crowd from the area who had gathered at the palace of the regent, Abubakari Mauba Minkanila, to either hear him or catch a glimpse of him for the first time.

The Regent, Mauba Minkanila, noted that after serving President Kufuor loyally for the past seven years, there was no better person than the Vice-President to ascend the highest seat of the land. He pledged his support and that of his people for Alhaji Mahama.

Sensitize School Children On Wearing Face Masks Before And A...
10 minutes ago