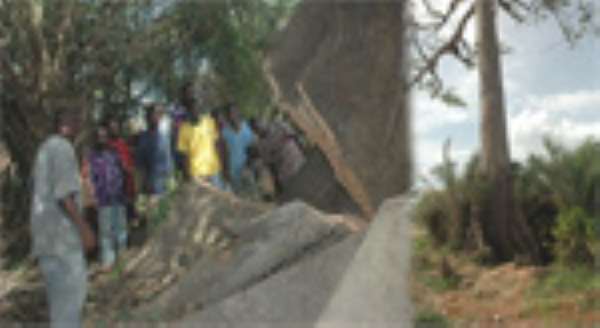 There was pandemonium yesterday at Ofankor, a suburb of Accra, when an Asafo group heckled and landed hefty slaps on the face of a self-acclaimed Nigerienne witch-hunter as he attempted to fell a tree which supposedly harbour witches.

The irate youth claimed that the tree, far from being a base for witches, was a shrine to which the witch-hunter had no right of access.

After the slaps, they demanded that he paid a fine of one cow, 6 sheep, one bottle of akpeteshie and 6 bottles of schnapps at the palace of the chief of the town, Nii Abban Kortei II.

After some haggling and bargaining, the chief dropped the cow from the list.

The incident stalled construction work on the Ofankor/Achimota road for the day, while the tree has been hacked considerably by the chain saw.

According to the Chief Linguist of the Asere Stool, Nii Ashietey Tetteh, the place where the Onyina tree stood was once a shrine, harbouring the gods of the land.

It was therefore sacrilegious for anybody and for that matter a stranger like 'Professor' Amidu Sabo Azeez to go there and begin cutting down the tree without seeking the permission of custodians of the land.

He confirmed that the youth actually brought the man to the palace because they realized that what he sought to do was not right.
Amidu Azeez himself agreed to pacify the gods in due course after being told the implications of his actions.

The aggrieved Chief Linguist said over the years, the elders of the town had spent a lot of money appeasing the gods in order to stop the rampant accidents at the spot.

He stressed that after many fatal accidents at the location, the elders consulted an oracle, which advised them on what to do.
This information, he continued, was shared with the Greater Accra Regional Minister and other relevant personalities.

The fatal accidents, Nii Ashietey noted, ceased after the performance of the prescribed rituals, which according to him run into several millions of cedis.

Some of the residents of the town who spoke to DAILY GUIDE said three marine spirits,(maame-water)- two females and a male- are inhabiting the tree, for which reason cutting it down proved unsuccessful in previous attempts.

They pointed out that five chainsaws broke down in previous attempts and for them nobody could fell the tree.

According to them, although they supported the felling of the tree to allow for the construction of a road through the location, this should be preceded by a consultation with the chief and elders of the town.

Prince Foli Nador, a driver and member of the royal family urged the contractors, the witch-hunter and the Ghana Highway Authority to thrash out the issue quickly to allow the stalled road project to continue.

However the foreman of the Chinese Construction Company on the road project, Wisdom Quarshie, denied that the project had been slowed down over the supposed witch tree.

He explained that the project had not reached the location of the tree and that if it did, they would cut it down in the night to avoid vehicular hold-up.

Narrating the day's dramatic events to DAILY GUIDE, he said the youth of the town attacked the workers, claiming they had brought Azeez to cut down the tree without the permission of the chief and elders.

Some of the youth, he said, hurled stones and other dangerous weapons at them, and they had to run for cover, adding that he quickly called in the Police who came to rescue them and the witch-hunter.

Showing DAILY GUIDE bruises he sustained at the scene of the mayhem, Quarshie said they did not feel safe at the project site.

Their employers, whom he said had been notified about the incident, had not yet turned up as at 2.30pm when DAILY GUIDE was at the location.

One of the workers, Stephen Akoto Mensah said he had to lock up the foreman in their wooden office to prevent the irate youth from lynching him.

He recalled that an earlier attempt to bring down the tree using the company's bulldozer failed until the medicine-man, Azeez approached them with a proposal.

However this was again denied by other workers who said that particular tree was gigantic with a very huge trunk and therefore needed a more powerful chainsaw to cut through it.

At the Tesano Police Station, where the matter finally landed, the Divisional Commander, Mr. Duku asked Mr. Acquah from the Ghana Highway Authority to cooperate with the Ofankor elders in performing the prescribed rites so that Azeez can finally cut down the tree- a task he had already started.

A driver, Afrifa, who was apprehensive, emphasized that the tree should be cut down quickly to avert a future disaster. The chief linguist said that after the pacification rites, the elders would consult the oracle on the issue.

At this stage, he added, the oracle would prescribe a further ritual after which the tree could even fall without anybody felling it.

The witch-hunter, who resides in Suhum, was on Peace FM yesterday, saying that he was driven into action by the stories he had heard about the 'witch-tree'.

It was alleged that a chainsaw operator lost his life in a previous felling attempt which was quickly rubbished by the foreman. He said no worker had been hurt or killed 'by the powers of the tree'.

It would be recalled that a fortnight ago, the Chinese firm working on the Ofankor/Achimota dual carriageway were unable to fell the tree because poisonous snakes were falling on the bulldozer operator, who eventually gave up after several attempts.

Akufo-Addo not bound to nominate recommended MMDCE hopefuls ...
40 minutes ago