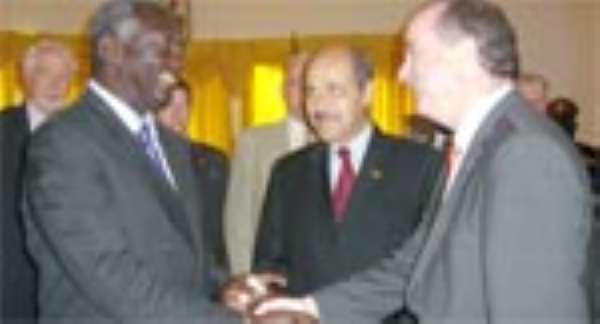 A GERMAN DELEGATION is currently in the country to partner Ghana in exploring energy generation sources.
The project would involve the use of solar, wind and all forms of energy sources in addition to the country's existing hydro-power.

The delegation, which was led by George Boomgarden, Secretary of State in the Federal German Foreign Office, called on President John Agyekum Kufuor at the Osu Castle, yesterday. It includes representatives of German energy corporations.

The group had earlier held discussions with the Minister of Energy, Joseph Kofi Ada, during which the energy experts shared their experience and how Germany had tested the energy mix.

President Kufuor explained that because Germany was noted for quality in the energy sector, “we cannot get better partners for technology”.

The President recounted how Ghana had been heavily dependent on hydropower for its energy needs all along.

“For the past two years the entire country has been living in darkness and this has affected both industry and society”.

He told the delegation that as part of government's determination to find a quick solution to the energy challenges facing the country, it had to import thermal plants.

According to the President, government had to spend over $30 million a month, to fuel the thermal plants. “Fueling the thermal plants has been expensive since we are not an oil producing country, though we have discovered oil.”

Ghana, he said, wanted to establish a durable and efficient system of energy generation and supply that would in the long run support the growth of the economy. “We want Germany to be at the forefront in the search for alternate source of energy and we are ready to learn from you and receive the technological advice you give us”.

President Kufour, who doubles as the Chairman of the African Union, said Africa was positioning itself to close the energy gap with Europe, emphasizing, “We are looking forward to a strategic partnership which will stand the test of time.”

Africa, he said, had a lot of raw materials and “now we want to add value to the raw material so we can stand competition”.

After expressing hope that the two continents would cooperate for their mutual benefits, President Kufuor asked the delegates to serve as advocates in that regard.

On his part, leader of the delegation, George Boomgarden said Germany had recognized Ghana's efforts towards economic development and that of Africa as a whole, and stated that the German Chancellor, Angela Merkel had decided to make Africa her focus and was looking forward to a successful EU/Africa Summit, scheduled for December 2008.

He pointed out that the energy mix was what pertained in Germany “and we want to introduce this in Ghana. We are ready to help you get that technology.”

The German official later congratulated Ghana for successfully raising $750 million worth of sovereign bonds on the international capital market.

The President wished him well after expressing the hope that his successor would build on the solid foundation he had laid.