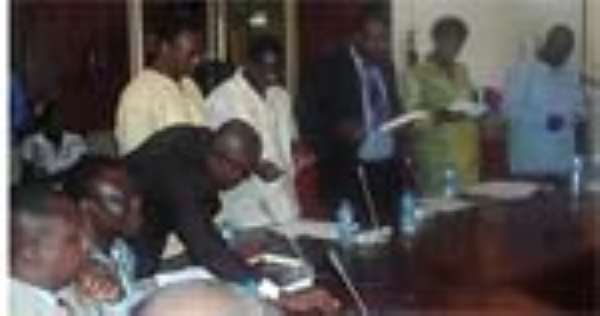 “My ministry applauds the Auditor-General for a well done audit and we commend your committee for a good job in making public the auditing of the public accounts of this country, so that the taxpayers of this country will indeed know how effectively and efficiently the monies collected from them are used to run the affairs of the nation,” he emphasized.

The minister noted that the public hearing was another step in ensuring accountability and transparency which were major components of the New Patriotic Party government's goal of ensuring good economic governance.

He expressed the hope that the true meaning of the exercise would not be lost in politicizing the process.

The niceties were contained in a statement presented by the Deputy Minister when he appeared at the PAC's fifth public sitting yesterday, in respect of the A-G's report on the Public Accounts of Ghana.

He indicated that the integrity of the financial system of the country should not be allowed to be subverted by corrupt and fraudulent practices, and stressed the need to expose and weed out the bad nuts.

Prof Gyan-Baffour pleaded, however, that “our pronouncements and utterances during this and subsequent open hearings should not undermine the very integrity of our financial system that we are trying so hard to nurture, fortify and preserve.”

He observed that the municipal and district assemblies need to review and strengthen measures to combat financial irregularities and fraud.

The Deputy Minister conceded that there were challenges in public financial management in general, prompting his ministry to vigorously implement the Public Financial Management Reform Programme, to strengthen management capacities and improve their internal controls and guidelines, as well as logistics support.

Prof Gyan-Baffour indicated that his ministry would take steps to introduce and implement the outstanding issues in the reform process, including the accounting manual for MDAs and the establishment of Financial Administration Tribunal.

On the specific measures by his ministry to mitigate the weaknesses identified in the reports, the minister said measures and other policy initiatives were being implemented to boost revenue collection and improve Tax Administration in general.

He also announced that measures have been taken by all Revenue Agencies to institute and undertake regular review of their debt profiles in order to improve the effectiveness of collection.

On uncollected taxes, the Deputy Minister indicated that ¢73 billion of the outstanding ¢183.8 billion had been collected as at 2005.

He pledged his ministry's resolve to co-operate with PAC to ensure that the financial resources of the country were effectively, efficiently and rationally utilized.