Hackman - I am the largest investor in NPP 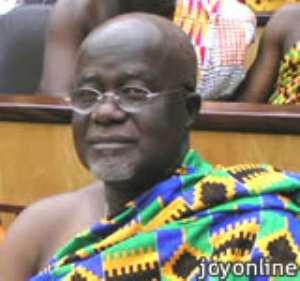 
Mr Hackman Kwame Owusu-Agyemang, a flagbearer aspirant of New Patriotic Party (NPP) on Monday declared that "he is the largest single investor within the party".

"My commitment to the principles and ideals of the party made me procure its first National Head Office at Kokomlemle in Accra, purchased the first car for our General Secretary and sold my house at Ashaley Botwe, a suburb of Accra to support the party".

"I have placed my house at Ridge at the disposal of the party as a club house for social interaction...and as one of the original three principal foundation members, I have invested materially, financially and physically in the party at a great cost to my immediate family," Mr Owusu-Agyemang stated at Asamankese in the Eastern Region.

Mr Owusu-Agyemang made the declaration during interactions with 10 constituency executives, polling station officials and opinion leaders from 22 out of the 28 constituencies in the Eastern Region which formed part of the first phase of zonal campaigning mechanism adopted by the aspirants barely two months to the crucial Special National Delegates Congress in Accra.

Mr Owusu-Agyemang, reiterated his pledge to form an all inclusive bi-partisan National Development Think Tank (NDTT) that would generate feasible and results-oriented ideas for the acceleration of the country's economic growth and ultimately reduce poverty.

He explained that the NDTT would be formed with individuals drawn from government, private sector, academia, youth, trade unions and across the political divide.

"It would be involved in ideas generation and basically focus on doable ideas leading to policy formulation and implementation for faster national transformation and consolidation of the economic gains," he added.

Mr Owusu-Agyemang, Member of Parliament for New Juaben North and former Minister for Foreign Affairs as well as Water Resources, Works and Housing, said NDTT would brainstorm, troubleshoot and ensured that the agenda as a nation was home grown with all political formations supporting it.

The NPP flagbearer aspirant said it would ensure continuity of economic development policies regardless of which party was in leadership, stressing, "The 21st century calls for greater collaboration among government, private sector and high education for complex adaptive research and development projects in the fields of technology, agriculture, health, the sciences and engineering."

Mr Owusu-Agyemang, described within NPP as "Action Man, Proven and Tested" said the Presidency under Hackman would strengthen the country's financial system for accelerated growth agenda with "abundant and cheap credit".

"We would continue rebuilding the nation's economic and social infrastructure to support accelerated growth that would put more money into pockets of the average worker," he told the ecstatic crowd.

He urged the delegates to assess him based on his track record as an individual, Member of Parliament, Minister of State, International and local exposure and contribution to the development of party and vote massively for him on December 22.

Mr Owusu-Agyemang stated that "he has enough experience both as a party man and with global perspective to deal with the challenges of the country. I believe that my credentials has assumed a gargantuan proportion in this regard".

The campaign team included his wife Comfort, Parliamentarians and some leading members of the party.

54 Nigerians Await Repatriation After Sneaking Into Ghana
20 minutes ago

Coronavirus: Some School Staffs Including 55 Students, Test ...
20 minutes ago