NPP Castle Meeting ·The Inside Story 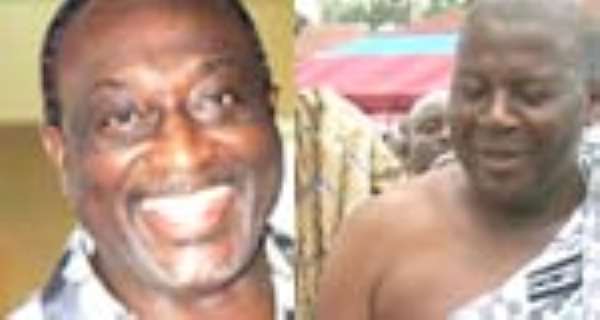 Former Presidential Spokesperson and New Patriotic Party (NPP) presidential aspirant, Kwabena Agyei Agyepong has taken up issues with other aspirants for failing to put their concerns on the table at last Monday's crisis meeting at the Castle.

The NPP mediation committee had arranged a meeting with President John Agyekum Kufuor to address nagging issues about the party's presidential race.

However, most of the aspirants including front-runners maintained studded silence, preferring to bottle up their concerns.

Mr. Agyepong said he was surprised that most of the aspirants went mum when given the opportunity to speak, noting that issues were swept under the carpet.

“As far as I'm concerned, the meeting was inconclusive. It was not successful as issues were swept under the carpet,” he charged.

For the three hours that the meeting lasted, the leading aspirants including Vice President Aliu Mahama; Nana Akufo-Addo, former Minister of Foreign Affairs; Dr. Kwame Addo-Kufuor, former Defence Minister; Hon Yaw Osafo Maafo, former Minister of Finance and Economic Planning and Dan Botwe, former General Secretary could not utilize the ten minutes time allotted to each of them to put their concerns on the table.

Not even John Alan Kwadwo Kyerematen, former Minister of Trade and Industry who is in the eye of the storm, would utter a word.

The meeting had been convened by party elders to address pertinent issues especially the perception of Alan enjoying presidential favour and the thorny issue of the selection of delegates for the December 22 congress at the University of Ghana, Legon.

After an eerie silence from the aspirants following the initial open comments from the Chairman of the Council of State, Prof Daniel Adzei Bekoe and the National Security Minister, Francis Poku, DAILY GUIDE learnt that Kwabena Agyepong broke the ice when he took issue with the selection of delegates.

According to Mr. Agyepong, the party has not been forthcoming with the selection of delegates, pointing out that this could be a potential danger for the congress.

He said some of them were more concerned with the creation of a level playing field, especially in the selection of delegates which could possibly be manipulated.

He therefore called for the formation of an election committee to oversee the conduct of the congress.

According to him, the committee, styled along the lines of Inter Party Advisory Committee (IPAC) should include representatives of the aspirants, in order to assuage their restlessness and assure them that there was no cause for alarm.

Article 6 sub-section 18 of the NPP Constitution clearly spells out the modalities for the selection of delegates through the holding of Extraordinary Constituency Delegates Conference to elect six ordinary members of the party to join four constituency officers to make up the 10 delegates.

However, Mr. Agyepong said the time left was too short to achieve that constitutional requirement suggesting that the current nine constituency executives should be made delegates with the addition of the sitting MP and in the case of orphaned constituencies, the elected parliamentary candidates.

His contribution, DAILY GUIDE learnt, received support from two other aspirants while others shot it down, describing it as a red herring.

But Mr. Agyepong told DAILY GUIDE that any attempt to create an uneven playing field would be met with stiff resistance. “It has to be clean; anybody who wants to screw it would be resisted and defended with our blood,” he warned.

Mr. Agyepong said he was not a coward and that he spoke his mind and wanted other aspirants to follow suit but most of them chickened out.

DAILY GUIDE learnt that the meeting was a bit charged especially when Jake raised the issue of presidential support for Alan Kyerematen. The President was said to have challenged him to substantiate or withdraw his comments.

The President also reminded Jake of certain unsavoury remarks he had reportedly made about him and the party during his campaign tour of the constituencies.

Prof Mike Oquaye, a former lecturer at the Political Science Department of the University of Ghana, Legon did not lose the opportunity to revise his history notes as he warned against the calamity that befell the Roman Empire.

The Dome/Kwabenya MP took his time to lecture the meeting about the fall of the ancient Roman Empire, saying that they should stick to the “status quo” in the selection of delegates.

However, all the aspirants pledged to work together after the congress, saying that they all needed the support of the President.
They said they would back whoever wins the mandate of the delegates.

President Kufuor pointed out that he worked hard to lead the party, touring the whole country six to seven times.

Dr. Arthur Kennedy advised his colleagues to stop whining and nagging about presidential support and rather work for party unity.
The meeting ended with a prayer from the National Security Minister.