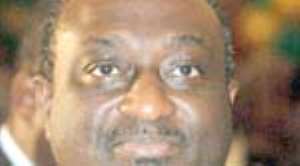 A leading contender for the New Patriotic Party (NPP) flagbearership, John Alan Kwadwo Kyeremanten is expected to file his nominations today, three days after the party opened the process.

A source close to Mr. Kyeremanten's campaign team told DAILY GUIDE that the former Trade and Industry Minister would storm the NPP headquarters at Asylum Down with his completed form and the filing fee of GH¢25,000 (¢250million).

Mr. Kyeremanten, sources said, had invited all the people who would endorse his application form from all the 230 constituencies to his campaign office at Cantonments on Saturday to complete the process.

The presidential aspirant was among the first 11 people to pick the nomination form on Saturday.

He was represented by his agent, Dr. Samuel Annor, who told journalists that Alan was busy with equally pressing issues.

The filing of nominations would be preceded by the official launch of his campaign at the Holy Gardens, Kwame Nkrumah Circle, where his supporters would accompany him to the NPP headquarters to submit his forms.

A member of the campaign team told DAILY GUIDE that the early submission indicates Mr Kyeremanten's readiness to provide leadership to the party.

Some other leading contenders such as the Vice President, Alhaji Aliu Mahama and former Foreign Affairs Minister, Nana Addo Dankwa Akufo-Addo are yet to pick their forms.