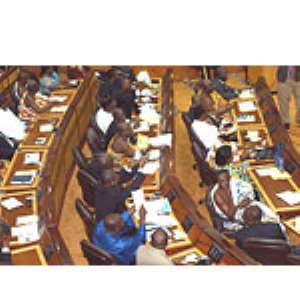 Debate on the Transfer of Convicted Persons Bill, could not be resumed yesterday because of an un-resolved issue between the joint committees on Interior and Defence, on one hand, and the Constitutional, Legal and Parliamentary Affairs, relating to a joint report on the bill.
When the Speaker, Mr Ebenezer Sekyi Hughes, called for the resumption of debate on the Transfer of Convicted Persons Bill, Mr Alfred Agbesi, (MP for Ashaiman) who stood on his feet, said the debate could not proceed because the matter concerning a joint report prepared by the two committees, which had only one signature of a chairman, had not been sorted out as directed by the Speaker last week.


Last week, Mr Eugene Atta Agyepong, Chairman of the Committee on Interior and Defence, told the House that his committee was not part of the joint report presented to Parliament because his signature was not on the document.


Mr Agyepong raised the issue shortly after Attorney-General, Mr Joe Ghartey, moved a motion for the Second Reading of the bill seconded by Mr Kofi Osei-Ameyaw, Chairman of the Committee on Constitutional, Legal and Parliamentary Affairs, who then presented the joint report of his committee and that of Interior and Defence detailing the merits of the bill, which is to enable Ghanaians convicted outside the country serve their sentences in Ghana and other foreign nationals convicted in Ghana serve their sentences in their own countries.


The Speaker had deferred debate on the bill, last week, to allow the two chairmen sort matters out, however when business began today, Mr Edward Doe Adjaho, Deputy Minority Leader, together with Mr Agbesi, said the two committees had still not resolved the issue, forcing the Speaker to rule that the matter be sorted out again, this time with the consent of all members of the two committees.