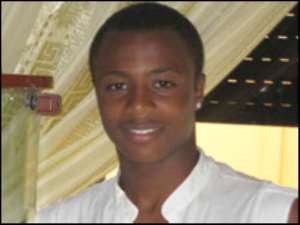 The 17-year-old midfielder completed a three-year deal on Monday to keep him at the club until June 2010.

Dede joined Marseille as a trainee in 2005 and has impressed by scoring 11 goals with the second team this season.

"I am grateful to God for giving me the opportunity to play for the first team of this great club," Dede told BBC Sport.

"I know this is the result of the hard work I have done since joining the club two years ago.

"I will not let this opportunity slip past me as I will do everything possible to justify the confidence reposed in my ability."

The teenage prodigy is keen to emulate his father, who also won the African Footballer of the Year award three times in the 1990s.

"It is definitely a hard act to follow in the footsteps of the maestro Abedi Pele - there can only be one," Dede said.

"But I want to make him proud by turning into a world class player and I am confident that I am capable.

"I promise Ghana and Africa that I will not lose my head and I will represent the continent in a postive way."

Dede will join the first team on their pre-season preparations next month.