A DAYLIGHT ROBBERY IN PARLIAMENT: 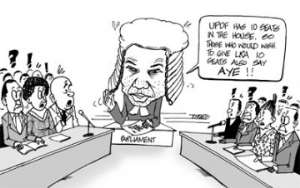 ...$25 Million for Parliamentary Services, whilst the lights are off?

The two Magic Words which can change Ghana: 'If Only'!
ANYTIME one reads an article about our MPs and other appointed or elected officials, one is tempted to mandate a test to determine their level of empathy, patriotism and concern for the ordinary people they claimed to serve. Wherever one goes in Ghana ,one can se things like: ailing factories, falling school walls, poorly planned towns, dysfunctional hospitals, dying Postal offices, bad roads and struggling social institutions which could benefit from some form of financial resuscitation from the government. So when one reads about how Ghana's politicians find their way to spend money waa,waa, one is compelled instantly to add these two magic words: ”If Only”……….!

If only the politicians and policy makers had taken a test to determine their level of empathy and concern for the common person in the land, things would have been different.

If Only, our politicians had the country at heart they would not propose wacky ideas, every now and then. How can we possibly demand “$25 million to restructure the Parliamentary Services, to enable it to play a more effective role”? What about the Police, Teaching and Health services, just to state only the a few? I beg your pardon? Did I just come out of a coma? How can a country which sleeps in darkness most of the time, afford to spend twenty-five million dollars on its” parliamentary services”— a nice euphemism for personal loan,”to see the Mps off”— a loan which; they have no intention of paying back. By the way, what happened to the car loan and how many Mps have paid so far? So a new loan will be given every time a new Parliament is inaugurated—even if the old loan is not paid for?. I want to be an MP in my next life ! I'm seriously working on my reincarnation.

If Only our Politicians lived in a real (business) world, they would know that before an employee spends a company's money the 'employer' had to approve of it. In this case the employers are the Ghanaian electorates. My question is this: Can our politicians meet the electorates and tell them face-face why they need $ 25 million to run the parliament? Speaking of the constituency members, when was the last time you (MP) visited your constituency? Isn't regular contact with the constituency one of the duties of Members of Parliament? The campaign season is around the corner and the Mps will soon find their way to the villages and towns 'waa, waa', so as to ask for another four more years. We Ghanaians have a very short memory to recall history that is why we keep making mistakes.

If only we had made use of our universities, forest, fertile land and the great sunshine climate, we could have figured out a solution to the energy problem that is so devastating to our economy and livelihood.

If only our Policy makers see and hear what the ordinary folks see and hear they will not propose money for their Parliamentary services. If you don't believe me go to my town and tell the folks—who had to travel five miles, just to get five gallons of water during the severe drought season—that you have $25 million to spend on Parliamentary services. I know what their reaction will be, but I will not promise you any personal protection.

If only our Mps had any conscience and knew how outraged we were, such a wacky idea would not have been proposed, given the fact that Ghana had a lot of pressing issues which need more attention than the self-interest of some few crop of individuals .Believe me, most; of us can easily smell it even from afar .Such proposal always leaves a bad taste in our mouths. It also sends a bad signal to the electorates who put everything on the line to elect them. The voters let the car loan go. They even let the drugs saga and other scandals go, just for the sake of the nation's unity and peace of mind. But, how long can they be taken for a ride?
If only the Mps want to make a difference they will set up e-mail addresses and solicit free ideas and suggestions from Ghanaians all over the world. So tell me something: Does it mean there's no single soul in Parliament who has the courage to be different and stand out of the rest? Yes, I know that being different won't automatically make an MP better, but it's often enough to give an MP the reputation of being a rare breed politician, in the eyes of the people. Being 'politically innovative' could have given you the courage to fight against this $25 million loan for Parliamentary services. Then again, if only they cared about the welfare of the people this idea would not have crossed their minds.

Then again, it's hard to think positively when you sleep in darkness .

The author has 206 publications published on Modern Ghana.