Devolution in Ghana: 50 Years After Independence 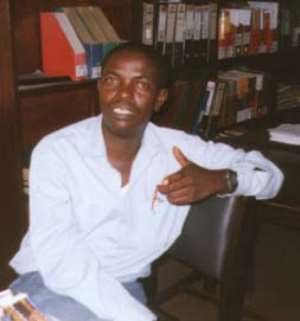 Africana Studies professor Ron Wilkins interviews Ghanaian editor and activist Kwesi Pratt at the half-century mark of the nation's independence. Pratt says two celebrations were held in Ghana, one by a government comprised of "the same people who opposed the independence struggle," the other "a celebration of the progressive ideas of Nkrumah, W.E.B. Dubois, Malcolm X, and all." The current rulers, says Pratt, besmirch the memory of Ghana's first President, Kwame Nkruhmah, who "was not just interested in Ghana's independence; he was interested in the independence of all people under colonial rule everywhere in the world.

Ghana occupies a special place among African nations as the first country on the continent south of the Sahara to win independence from colonial rule. Having visited Ghana previously, I began my eleven day stay with some reservations, as I was aware that no government, since the original government of President Kwame Nkrumah - which was overthrown by a 1966 CIA-led coup - has surpassed his achievements. Under Nkrumah's brilliant leadership Ghana began to develop industrially and played a major role in liberating the rest of the African continent. Within 10 years of Ghana's independence, 31 additional African countries became independent. Declassified National Security Council and Central Intelligence Agency documents have provided new evidence of the 1966 U.S. engineered overthrow of Nkrumah's progressive government.

Immediately upon my arrival in the capital city of Accra, I was floored by the deepening poverty and desperation of its inhabitants. The lack of running water in my guesthouse, power outages and the foul odor from open sewers lining the streets. The cumulative effect of these conditions exacted a heavy toll on my senses and dampened any enthusiasm that I may have had for the celebrations. It seems that corruption knows no bounds, as Ghana's current leaders spent over 20 million dollars, imported 250 luxury cars and shabbily decorated Nkrumah's mausoleum in preparation for the celebrations.

"The people who are in the government today are the same people who opposed the independence struggle."

Eventually I held discussions with Nkrumaists, officials from the former Rawlings government, academics and students at the University of the Cape Coast and expatriates from the U.S. now residing in Ghana. Perhaps, one of the most insightful meetings was with Kwesi Pratt. Kwesi Pratt is a member of Socialist Forum, a central committee member of the Convention People's Party, and one of the most visible and outspoken critics of the present government.

Ron Wilkins: I would like to get some of your impressions of Ghana's 50th Independence Anniversary celebration. I'm having real problems with it. I'm not impressed with the government, or the progress that Ghana has made. I would like your comments because I know you're doing a great deal of work and are involved with many other people. I can imagine that the struggle must be very difficult. Just where do things stand at the moment? Your impressions.

They come from the same tradition which appealed to the Queen of England not to grant Independence to Ghana because the Ghanaian people could not manage their own affairs. They come from the same tradition which subverted the independence movement, even after independence by exploding bombs in stadiums, by plotting to assassinate Kwame Nkrumah, by working with the Central Intelligence Agency of the U.S. (CIA), and so on. So their celebration of the 50th Independence anniversary is in reality a celebration of their temporary victory over the masses.

Those of us on the other side are celebrating the victory of the masses over the exploiters and the oppressors. That is why the manifestations are very different. We believe in organizing street marches which involve all of our people. They believe in organizing elitist parties and celebrations that exclude the masses. That difference is obvious. Again, for us this is a celebration of the progressive ideas of Nkrumah, W.E.B. Dubois, Malcolm X, and all. They are celebrating, Busia and Danquah, who were agents of imperialism. And we have to understand this very clearly.

They make all kinds of obscene comments about how they initiated the independence struggle and that they led it and so on. But all that is lies. They claim for example that it was them, Busia, Danquah and others, who invited Kwame Nkrumah to join the United Gold Coast Convention.

The impression they create is that Nkrumah was doing nothing but sitting idle until they invited him. But that is false. Because long before Nkrumah came back to the Gulf Coast in1948 to lead the struggle, he had actually been involved in organizing nationalist agitators across the whole of the West African Sub-Region. He was not just interested in Ghana's independence; he was interested in the independence of all people under colonial rule everywhere in the world. And he was already engaged in those agitations. He had been part of The Manchester Pan-Africanist Congress, and so on.

And he came here precisely because the elite who were leading the independence struggle knew about their own shortcomings and they knew that they could not carry the struggle very far. And they needed the expertise and knowledge of somebody like Nkrumah to change the situation. And indeed, Nkrumah arrived in 1948, and by 1951 we had gained partial independence, by 1957 we had gained complete independence, and by 1960, we were already a Republic. So it is clear that this struggle gained special importance by the arrival of Nkrumah in Ghana.

Ron Wilkins: What should we be looking at in terms of this new thing that the Bush administration has come up with as far as an African Command? What should we be looking for from President Kufuor of Ghana and his role now coming up as the African Union chair? What is one to make of all this? Because, actually I'm very nervous about it. Just from what I've heard and what I've picked up on already, it seems that the United States has gained a foothold in Ghana and is expanding its influence here.

Kwesi Pratt: I am very alarmed after reading what is called the Cheney Report. When Bush came to power, he set up a committee chaired by Dick Cheney his Vice President to assess America's energy requirements up to the year 2015. The Cheney Report actually says that by the year 2015, twenty percent of American oil requirements will be supplied by West Africa and therefore it is important to maintain a foothold in West Africa in order to ensure that oil supplies from West Africa to the United States of America will not be interrupted.

Consequently, the United States is planning to establish military bases across West Africa including Ghana. And I am very worried that at a time when we are celebrating our national independence we are going to tolerate the establishment of foreign military bases, especially American military bases on our soil. The great Osageyfo Dr. Nkrumah, Malcolm X, Kwame Ture, and all of them emphasized that Africa ought to be free from foreign military bases and weapons of mass destruction. We cannot allow that dream to die.

That is why, it is important for us to resist all attempts to establish foreign military bases on African soil especially forces of the United States, must be prevented from establishing on African soil. Clearly because they are not on African soil to protect our interests, they are on African soil to facilitate the exploitation of our resources for the benefit of the tiny minority that controls the wealth of the American people and who are sitting on top of this world exploiting the Chicanos, exploiting the African Americans and exploiting all of the other independent and healthy forces in the United States of America. We have to resist all attempts to build U.S. military bases in Ghana and elsewhere in Africa.

Ron Wilkins: The Joseph Project. What's your take on it? It is very important that Africans in the Diaspora, especially in the United States, assist Africa's development and assist the struggles against neo- colonialism and imperialism. However, The Joseph Project is being couched in very religious terms. I am not a Christian, but I love Africa. I have long acknowledged Africa as my ancestral home. And I want to come here as do many others, but not within a Christian framework. There are some other obvious meanings to this Joseph project that have been established. I just wondered what your take on it is.

Kwesi Pratt: I think that The Joseph Project is an insult to all people of African descent, whether you are on the continent or you are in the Diaspora. It is an insult because it starts from the basis that there was something positive about slavery, that as a result of the Trans-Atlantic Slave Trade our brothers have become the Josephs of Africa today. And they are returning with their wealth that they acquired from slavery. I think this is absolute nonsense. It is something we should not countenance at all. There could not have been anything good about the Trans-Atlantic Slave Trade. And the concept of a Joseph coming back to deliver us from poverty is a foolish concept that must be rejected by all dignified African people.

Our brothers in the Diaspora are welcome back home as Africans with a commitment to help us to develop, and with a commitment to help us fight against the penetration of imperialism into the continent. They are not coming as Messiahs, they are coming as one of us. And they are not coming because they benefited from the Trans-Atlantic Slave Trade; indeed they themselves are victims of oppression and victims of exploitation. That point must be made abundantly clear to those who think that something was gained from the Trans Atlantic Slave Trade. That is the whole concept of The Joseph Project, and I reject it completely.

Ron Wilkins: Thank you very much.

(This article was originally published in the Black Agenda Report)