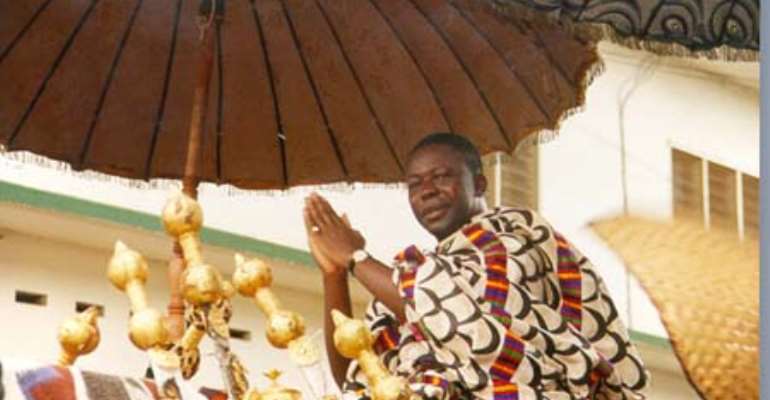 Today, Sunday May 6 2007, goes down in history as one of the most memorable and historic days in Asanteman.

The day, which is the third Akwasidae of the year 2007 on the Asanteman Calendar, is coincidentally the 57th Birthday of the Asantehene, Otumfuo Osei Tutu II.

As custom demands, Ghanaians who draw their lineage from Ashanti, will go and pay homage to the Asantehene, who will sit in state at a Grand Durbar of Chiefs including all the 39 paramountcies in the Asante Kingdom.

In the annals of Otumfuo's reign, this is the first time his date of birth has coincided with Akwasidae, which is celebrated on the first Sunday after every 40 days on the Asanteman Calendar.

He is the 16th Asantehene and is a direct descendant of the founder of the Asante Kingdom, Otumfuo Osei Tutu.

Born on May 6, 1950, Otumfuo Osei Tutu II is the youngest of the five children of Nana Afua Kobi Serwaa Ampem II (Queenmother of Asante). His nephew is Ghanaian/American professional wrestler, Prince Nana.

He was educated at the Polytechnic of North London, now London Metropolitan University, from where he recently received an honourary degree of Doctor of Philosophy, conferred at a ceremony at Barbican Centre, London, on 11th January 2006.