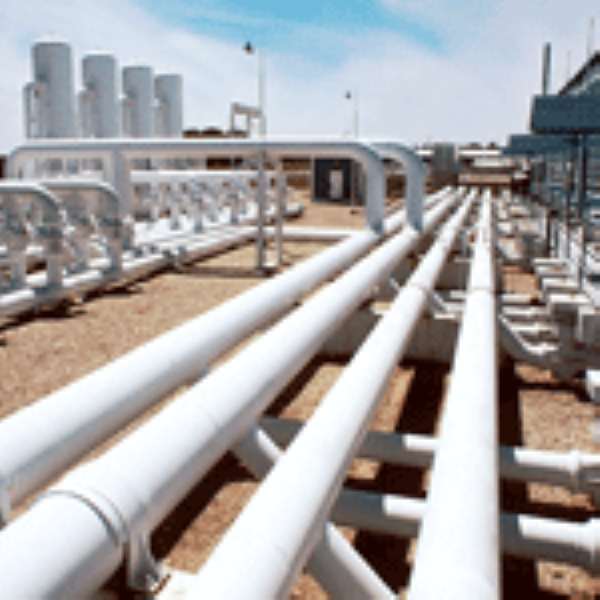 The 500 million-dollar West African Gas Pipeline (WAGP), the flagship project of the sub-regional body ECOWAS, is set to come on-stream soon with the inauguration on Friday of the Gas Export Terminal at Ikoti in Ogun State, Nigeria.

About 170 million cubic feet of gas a day (170 Mmsfd) would initially pass through the transmission system to Ghana, Togo and Benin.

Of this, 85 percent would be used for power generation and the remaining 15 per cent for industrial application.

President Kufuor said the project, which would provide affordable fuel for energy generation, was a major foundation for regional economic growth and development.

He said no country could talk of development without reliable energy supply and that WAGP was a cornerstone project that was going to open up Africa and encourage partnerships.

Ghana is expected to save between 15,000 to 20,000 barrels of crude oil per day by taking gas from the WAGP to run its power plants.

President Kufuor, the African Union (AU) Chairman, used the occasion to counsel Nigeria and its political leaders not to allow emotions flowing from the widely criticised recent elections to threaten the peace and security of their nation, the economic powerhouse of the sub-region.

He said they should use the constitutional approach to resolve whatever problems they have, reminding them that any unfortunate situation there could destabilise the entire region.

"I congratulate all the political parties for restraining themselves and I urge them to stay the cause."

President Obasanjo advised the people not to be tempted to tamper with pipelines carrying the gas.

"It is not an oil pipeline. Do not say you want to find out what is inside", he said drawing cheers from the big crowd that witnessed the ceremony.

President Yayi Boni, described the project as "God-sent", and that it would save his country and it's next-door neighbour, Togo, which are experiencing their worst energy crisis.

Dr Mohammed Ibn Chambas, President of the ECOWAS Commission, said the inauguration of the terminal was an important milestone of the realisation of the dream of the WAGP, conceived some 25 years ago.

He praised President Obasanjo for his sense of commitment to the WAGP and said it would remain a monument of his pan-African vision.

It is projected that between 10,000 and 20,000 primary sector jobs would be created in the sub-region by the project.

In addition, it is also estimated that apart from the already envisaged one billion dollars (WAGP and power facilities) investment, another 800 million dollars in new industrial investment could result from it.

Mr Fred Nelson, Managing Director of Chevron, one of the Shareholders, said by the project, a foundation was being laid for true energy security in the region.

Sam George kicks against reopening of basic schools amidst i...
55 minutes ago