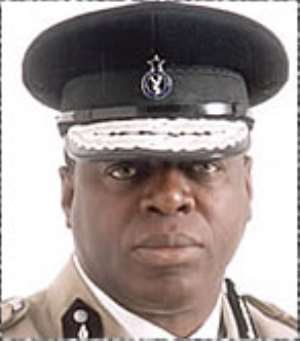 Three persons believed to be part of a syndicate which steals money from various banks countrywide have been arrested by the Police.

Sylvester Annor Barnie, alias Kokou Awity, the alleged kingpin of the syndicate, Lyana Ellen Aidoo and David Ampiah, the Clearing Officer of the ARB Apex Bank, were arrested after one of their daring moves was foiled.

The police have so far been able to establish that the syndicate was able to withdraw ¢215 million from one of such banks and that an attempt to withdraw nearly ¢1 billion from another account gave them up.

The police are currently pursuing other accomplices, who include officials of other top banks.

The names of the affected banks are being withheld to facilitate investigations.

The Director of Operations of the Criminal Investigations Department (CID) of the Ghana Police Service, Assistant Commissioner of Police (ACP) Charles Tokor, told the Daily Graphic on Tuesday that the modus operandi of the syndicate was to employ the services of their accomplices to open accounts with various banks, particularly the rural banks.

It then secured the cheque books of the account holders.

He said the signature of the account holder was forged and the cheque issued for huge sums payable to other accomplices.

Mr Tokor said when the cheques were presented for payment at the paying banks, the syndicate in concert with a staff member of the bank in question, suppressed the cheques from going through the normal processing for clearance.

He explained that wit a day's delay, the cheque would be considered technically cleared by banking regulations, adding that the syndicate and its accomplices would quickly cash all the money from the account before it is returned as dud.

He said on the same day he demanded a cheque book, out of which he issued a cheque number 00000l for ¢217.8 million payable to Lyana.

He said Barnie and Lyana went to a branch of Lyana's bank and lodged the said cheque in her account.

Mr Tokor said the bank processed and forwarded the cheque to the Clearing House at the Bank of Ghana.

He said it was only on March 1, 2007 that Ampiah released the cheque and it was declared dud.

According to Mr Tokor, the cheque finally got to Lyana bankers on March 2, 2007, by which time Barnie and Lyana, with foreknowledge of the movement of the cheque from Ampiah, had gone to withdraw ¢150 million from Lyana's account.

Mr Tokor, said Barnie and Lyana, on the same day, went to another branch of Lyana's bank and withdrew the remaining ¢65 million, bringing the total to ¢215 million.