Asantehene Calls On Traders To Co-Operate With Decongestion Exercise 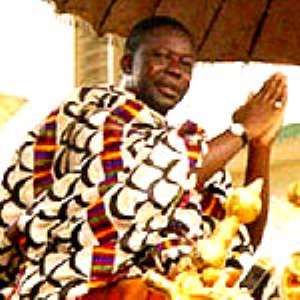 Otumfuo Osei Tutu II, the Asantehene, yesterday called on traders and residents in the Kumasi Metropolis to appreciate the decongestion exercise being carried out by the Kumasi Metropolitan Assembly and co-operate with the authorities to ensure its success.
He said if the city became clean and tidy it would be to the benefit of people and no one should therefore read politics into the on-going exercise.


Otumfuo Osei Tutu was briefing newsmen after inspecting some on-going development projects in the Metropolis.


Otumfuo Osei Tutu started the inspection with a stop over at Kejetia and the Central business district of the Metropolis where Madam Appiagyei briefed him on the effects of the decongestion exercise. From there the Asantehene went to the City Hotel, the Baba Yara Sports Stadium and the Jackson Park to inspect progress of work.


He ended the inspection at the Affordable Housing Project at Asokore-Mampong where Mr Gideon Amankwa Adiyia, the Consultant of the project told Otumfuo Osei Tutu that the project would provide accommodation for over 5,000 workers.

While passing in a long convoy, people trooped to the streets amidst cheers and jubilation and sang praises on Otumfuo Osei Tutu who had been rumoured in recent times as having "kicked the bucket."


The Asantehene expressed satisfaction about the progress of work on projects he visited and urged the various contractors to continue to work assiduously to complete them on schedule. He called on the media to be circumspect and report on issues that would enhance the rapid development of the country.


Otumfuo Osei Tutu urged Ghanaian workers at the various project sites to learn from the expatriates so that they could apply the technology locally in future.