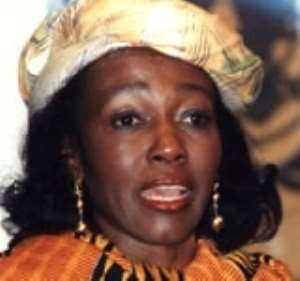 The new power rationing arrangement yesterday affected the trial of former First Lady Nana Konadu Agyeman Rawlings, and four others for their alleged involvement in the divestiture of the Nsawam Cannery.

Proceedings could not be heard because the High Street area where the Fast Track High Courts are located were in the morning category which suffered power outage from 6 am to 6 pm.

The court, presided over by Justice Paul Baffoe-Bonnie of the Court of Appeal, adjourned proceedings because the power outage made it impossible for proceedings to go ahead since the court is automated.

An automated court is one that records proceeding by computer.

They were originally charged with Georgina Okaitey, a Director, George Mould, a Director and Larry Adjetey, a Director/Secretary, but the Attorney-General withdrew the charges against the three under Section 59 of Act 30 of the Criminal Code.

They have pleaded not guilty and have been granted self recognisance bail.

Mrs Rawling and her co-accused persons were present in court which was filled by sympathisers, including some Members of Parliament of the opposition National Democratic Congress.

For about 45 minutes while the accused were in court, some NDC sympathisers, mostly women who stood outside the walls of the Fast Track Courts were heard singing and chanting slogans in a show of solidarity with them.

More Politics
ModernGhana Links
E-levy is not by force; don't use MoMo if you can't pay – Carlos Ahenkorah
Ablakwa raises red flag over GH¢240M allocation for e-levy revenue assurance
I enjoy peace of mind, having control of myself outside parliament — Inusah Fuseini
Ayorkor Botchway defends usage of Ghana’s presidential jet by other presidents
Parliament adopt revisions to 2022 budget despite Minority rejection
Minority to reject government’s ‘modifications’ to 2022 budget
Just reduce fuel prices; the plenty talks are unnecessary – Adaklu MP to gov’t
Revisions to 2022 budget not concessions – Jinapor
E-Levy: No amount of talks or reduction is needed; just scrap it – ASEPA to Ken Ofori Atta
TOP STORIES

W/R: Our school has become a sleeping place for madmen, big ...
8 minutes ago