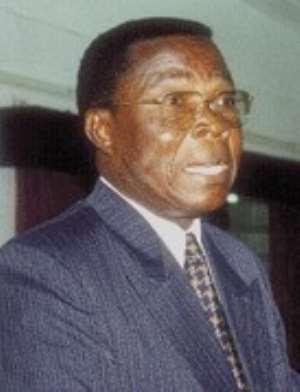 Information reaching modernghana.com indicates that the Chief Justice of the Republic of Ghana, Justice Kingsley Acquah is dead.He died at the 37 Military Hospital on saturday afternoon.He died of Cancer.

He has been out of the country for treatment in India and the United States of America for cancer until yesterday when he was flown back to Ghana.

Mr Justice Acquah was born in Sekondi on March 6, 1942 and attended Adisadel College, Cape Coast, from 1957 to 1963 for both his West African Examination Council Ordinary and Advanced Level Certificates.

He proceeded to the University of Ghana, Legon in 1964 to 1967 and obtained a B.A (Hons) Philosophy. Between 1968 and 1970 he studied and obtained LL.B. Hons in Law from the same University.

From 1970 to 1972, Justice Acquah entered the Ghana Law School where he obtained his Professional Certificate in Law and was called to the Bar in 1972.

Mr Justice Acquah was also the Chairman, National Multi-Sectoral Committee on the Protection of the Rights of the Child; Member, Rules of Court Committee; Member, Appointments Committee of the Judicial Council and Member, Africa Regional Council of the International Planned Parenthood Federation (IPPFAR).

Appointed Chief Justice of the Republic of Ghana on June 20 2003Justice Acquah has attended many seminars, conferences and workshops and has presented papers at a number of them.

He left behind a wife and six children.

We shall update you in a short while.