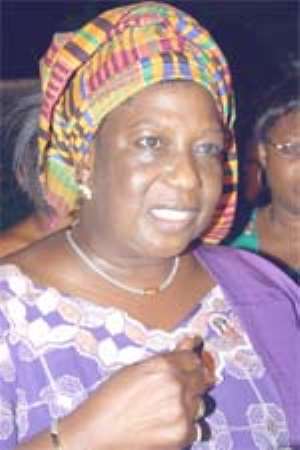 An elaborate road show is being contemplated for the remains of the late Madam Hawa Yakubu, one of Ghana's leading female politicians, who died in a London hospital a few days ago, Daily Guide has learnt.

Although the final arrangements have not yet been made, it appears some influential personalities in her family are asking that her remains make brief stops along the route to the Upper East Region.

Some of her admirers in Kumasi as in other towns in the country would want to pay their last respects to their idol before she is finally buried.

The late Madam Hawa Yakubu will be buried in Pusiga, her hometown, near Bawku in the Upper East Region, a family source has hinted Daily Guide.

It was gathered yesterday that a post-mortem examination was conducted on her corpse before its final flight to Ghana.

Daily Guide has also learnt that the late politician, fondly called “Iron Lady”, might be conveyed to Pusiga by road to allow her numerous admirers pay respects to their idol before she is finally interred.

Two persons, Derrick and Bawa, her eldest son and brother respectively, are already in London, ready to accompany the remains back home to Ghana.

Bawku in the Upper East Region has been gripped with grief over the death of the woman who has brought to them so much honour.

Although reports from London indicate that she died from cancer, the late Madam Hawa Yakubu was said to have told some persons long before she gave up the ghost that she had been poisoned.

News about this disclosure, attributed to a certain student of the African Institute of Journalism and Communications, Abdul Karim Nantogmah, whom she supported financially, the New Patriotic Party (NPP) Greater Accra Regional Youth Organiser, Alhaji Yusif Ahmed and Sheilla Sackey, the Castle Correspondent of Daily Guide, was met with mixed reactions in the country yesterday.

Whereas some expressed shock at the news, others treated it with misgivings, especially since they had read that she suffered from a cancer.

A reader phoned Daily Guide yesterday morning, referring the paper to her website,Hawayakubufoundation.org, in which he claimed the deceased was said to have had a gallstone problem.

For some who chose to refer to Madam Hawa Yakubu's condition as “slow poison”, the effects manifest in other common diseases.

Her death has attracted copious show of love from various strata of the Ghanaian community, regardless of political affiliations.

Her pre-interment church and burial service, it is believed, would be managed by the Roman Catholic clergy, the Christian denomination to which she belonged.

The late Hawa Yakubu, who was from the Busanga ethnic group, was born to Muslim parents but converted to Christianity later and was known in her school days as Rebecca.

Her late mother was even a Hajia, having performed the pilgrimage to Mecca.

She was known to have funded the pilgrimage to Mecca of many Muslims over many years.

Until her death, Madam Hawa Yakubu was the First Vice Chairperson of the New Patriotic Party (NPP).

She was on two occasions, Member of Parliament (MP) for the Bawku Central constituency, a position she held until 2004 when she lost out to the incumbent MP, Mahama Ayariga.

Fondly called the 'Iron Lady', Madam Hawa Yakubu was a domestic bursar at the Navrongo Secondary School from where she veered into politics.

She was a member of the ECOWAS Parliament, where she held the position of Chairperson of the Transport and Communications Committee.

A very glamorous woman who was a toast of many women, she was also generous to a fault.

During the last general elections, she supported a number of women candidates with both logistics and financial resources.

A certain Ms Barkisu Shardow told Daily Guide, “That woman was like a mother. She sponsored me with ¢7 million when I contested elections on the ticket of the National Reform Party. She also provided me with T-Shirts and other logistics.”

At the inception of the Kufuor administration, she held the position of Minister of Tourism- a post she quit under controversial circumstances, in order to keep her membership of the ECOWAS Parliament.

She subsequently lost her parliamentary seat in the 2004 elections with the ethnic factor in the Bawku area playing a key role.

Hawa did not give up as she stood for the NPP's vice chairmanship and won the position massively.

She had a strong contact in the West African sub-region, mingling with heads of state and leaders of governments.

Indeed she was on the campaign train of Mrs. Johnson-Sirleaf.