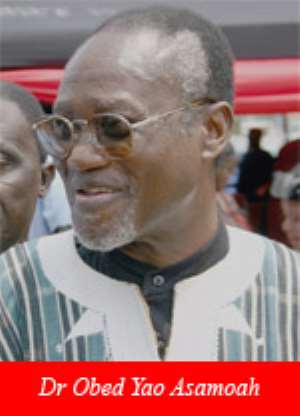 According to him, his participation could have won him more respect and sympathy, in the face of the objections he had been raising, and could have made his points stronger than ever before.

He expressed regret that many years after the NDC lost power, some of its leaders had failed to come to terms with the realities of the times and were still calling for red-carpet treatment.

The one time Attorney-General and Minister for Justice said the opposition NDC's trumpeted excuse that their founder's invitation to the anniversary came after other leaders had been invited did not hold water because, according to him, there was no way Rawlings could compare himself with sitting Heads of State.

Speaking to Daily Guide in an exclusive interview in Accra, Dr. Asamoah noted that once the former president and his party had lost the confidence of the people, as indicated in the 2000 and 2004 general elections, there was no way he could be treated like a sitting president.

“My friend, that excuse is untenable. We should not forget that the man is no longer the Head of State of this country.

There is a time and season for everything, and I thought he would recognise the stark reality that he is no longer in office,” he said.

The DFP boss said if he were the ex-president, he would have participated in the celebration instead of giving lame excuses.

When asked whether it was appropriate to have invited other leaders before getting in touch with the only living ex-president, Obed said that was no issue at all since he was no longer in office.

Using himself as a reference point, the former Justice Minister said even though he had enjoyed state protocol treatment for nearly two decades, he had no option than adapt to his current status as an ordinary citizen.

“Rawlings is not a Head of State, so the excuse that the invitation came late is no news.

I was once a Foreign Minister, and enjoyed all the largess that went with it, but today, I queue in heavy traffic in the city while current ministers pass by me with sirens clearing the way for them.”

On what the nation had failed to do in the 50 years of independence, Dr. Asamoah frowned at the way past leaders were denigrated the moment they left office.

To him, no matter how bad the policies of a leader may seem to students of history, those decisions must be weighed vis-à-vis circumstances of the times.

There were very good reasons for Ghanaians to celebrate the Golden Jubilee in a grand style, because a lot had been achieved between March, 1957 and today, especially in the areas of Health, Education and Road Infrastructure, he noted.

“Even though it doesn't mean we are completely out of distress, I think it is good to celebrate,” he concluded.

It would be recalled that the jubilee celebration, dubbed [email protected], attracted a lot of controversy, with some opposition party representatives openly describing it as unnecessary and a stress on the economy.

Even though they eventually participated in it, the former president abstained, saying it ran contrary to his personal philosophy and principles.