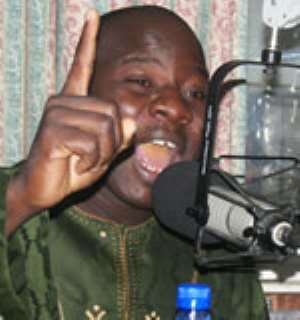 The Independent newspaper says the stage appears set for a confrontation between the Ghana Police Service and the Committee for Joint Action on Independence Day.

The paper says after the CJA lost its first appeal against the temporary outlawing of its planned procession on March 6th and vowed to go back to court on Monday, it has hints that some members of the group plan to go ahead with some sort of procession even if its second appeal to overturn the court decision fails.

“In a fashion that can best be likened to the position taken by DR Kofi Abrefa Busia when a court nullified dismissal of some 500 civil servants, information indicates that the Committee for Joint Action is set to damn any court ruling in its burning desire to stage its own March 6 procession,” The Independent said.

Information indicates that there are clandestine moves by some leading members of the CJA to at all cost do something that has the semblance of what they originally intended to do on March 6th, if their appeal is thrown out again by the court.

The paper said the CJA came to that decision last Friday after it had suffered a double portion of defeat at the hands of the same Accra High Court.

The first one was on Thursday when the CJA was pushed into a cul-de-sac by the High Court presided over by Justice Baffour Boney by placing an injunction on the group's intended procession through the principal streets of Accra to commemorate Ghana's 50th Anniversary.

The court threw out their case of appeal by upholding its earlier ruling that there should be no procession or any act that amounted to the demonstration or that run counter to the official celebration of Ghana's Golden Jubilee between March 5 and 14, 2007.

But the CJA last Friday was making frantic efforts to ensure that no court restrains it from going ahead with its intended procession.

The first of its attempts was the filing for another review of the court's decision to restrain the CJA from embarking on its forward march to the Kwame Nkrumah Mausoleum to lay wreaths and pay tribute to Ghana's first President, Osagyefo Dr. Kwame Nkrumah.

Meanwhile the Inspector General of Police has stressed that anyone who tries to defy the court order will answer to the law of the land.

He pointed out that the court has ruled and the police expect everyone to oblige so that there would be peace in the days the court basset aside for purely Golden Jubilee national celebrations.

The police went to court by an ex-parte motion to secure the order.

Reopening Of Schools: Not Testing Students, Staff Dangerous,...
26 minutes ago