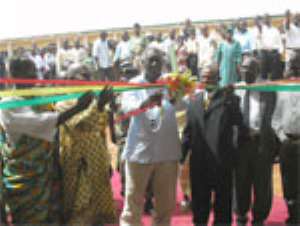 President John Agyekum Kufuor, on Saturday, commissioned a ¢22.3-billion Model School of Excellence at the Edinaman Secondary School in the Komenda- Edina- Eguafo Abirem (KEEA) District of the Central Region.

The Project is the first to be commissioned throughout the country under the model school of excellence initiative to upgrade one school in every district to ease pressure on well endowed schools in the country.

It comprises a library, teachers' flats, headteacher's bungalow, dining hall among others.

Speaking at the commissioning ceremony, President Kufuor said government believed that the quality of facilities equally affected children's education, so government would do everything possible to improve on the educational infrastructure of the country.

He stated that the government had given another 25 schools on contract to be upgraded into model schools and promised to produce quality teachers to man all.

The President expressed his intention to promote human resource development through quality education and stated that enrollment at the school had increased to 34% from 2005 to 2006 due to the upgrading of the school by the government.

He therefore appealed to Nananom and other Non Governmental Organisations to help improve on the educational sector of this country since the government alone could not do it.

The Central Regional Minister, Nana Ato Arthur advised the students to learn harder than before, urging teachers as well to impart, not only book knowledge, but moral discipline as well to the students.

He disclosed, the Central Regional Co-ordinating Council had awarded the road leading to the administration on contract for construction.