Ghanaian To Receive 2006 Businessman Of The Year Award In Washington, Dc. 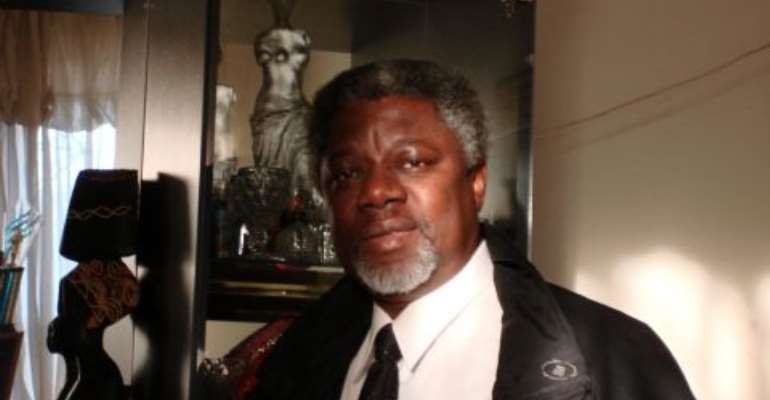 He has the smile and demeanor of a man destined for great works and a charm that might easily be mistaken for softness. He's even been likened, from a physical perspective, to the former UN chief Dr. Kofi Annan...the resemblance is unbelievably striking. Underneath it all is a confidence of steel and a litany of achievements usually reserved for a select few. Educationally, he holds an Ed.D, Ed.M, MA, MBA, Hons.B.Comm. and a BA (Econ).

Growing up in Ghana before settling in the States, this gentleman (Dr Gabriel Ayisi) knew from an early age that his would be no ordinary life, it would be one filled with intellectual curiosity, adventure, innovation, enterprise, and achievement. So when Dr. Ayisi (holder of three top New York State licenses) received a fax from Tom Cole, chairman of the Republican House Leadership inviting him to Washington to receive "The Businessman of the year award" for his latest business innovation, his closest friends (writer included) were not surprised. Not even remotely. Dr. Ayisi has been an honorary chairman of the Business Advisory Council of the National Republican Congressional Committee for economic stimulus since the beginning of 2006. The award ceremony will take place on March 15, 2007 in Washington at the Hilton Washington Hotel. The occasion will be graced by dignitaries from the business world and the National Republican Congressional Committee with President George W. Bush as special guest.

When this modest genius, who remains relatively unknown to most Ghanaians, (he's not your typical limelight guy) begins to dabble in his unflinching believe and the almost desperate need and desire for Ghanaians and Africans, for that matter, to cultivate the culture of "can...do...ism", you almost begin to get a sense of the urgency and motivation that drives his workaholic, intellectual, innovative, enterprising nature. "I believe in the power of ideas and its transformative nature" he quips in answer to a question I posed. "Why do we shelve our research findings? Why do we not have a strategic plan in place that taps the collaborative linkage between, government, private sector, and higher education? This is the strategic blueprint for our economic development....and not just the process of taking off economically, but more importantly, the process of sustaining the take off.” He says. Dr. Ayisi is a firm believer in Systems Thinking approach to management.

He continues, "When you recognize the private sector as the engine, literally, of a country's growth and link this fact with the inexhaustible/boundless intellectual resources of higher education and top this combustible combination with government oversight within a strategic process of synergic linkages...boom!!!, you have the magic potion that has driven, relatively unknown nations from obscurity to trail blazing economic success stories of today.” He asserts.

His resume reads like the stuff of which legends are made. Apart from his primary occupation as a professor (lecturer) in New York, Dr. Ayisi has, to his credit, established or is in the process of establishing innovative businesses that have been inspired by his singular vision of combining innovative ideas with realistic intellectual capital to realize productive value. Ideal World games LLC (USA), Motivational Centers International Inc. (a US based Non Governmental Organization), and Scientific Motors (Ghana) Ltd. constitute a sample of companies he has established. From a collaborative perspective, he and key partners are in the process of setting up ABP communications group, an integrated marketing communications group with specialized interest in publishing, advertising, research, consulting and printing.

Of particular interest to this piece is Ideal World Games LLC whose flagship innovation...a game called "WHO'S THE RICHEST" has generated enough interest and led to Dr. Ayisi being selected for the award of businessman of the year award for 2006, to be held in Washington DC. How did you pull this off? I ask, "This is America, center of capitalism....anything related to riches is sure to generate interest” he answers in his usual modest way.

This patented game, which targets an audience between eight years to adults, generates the fervor of unmatched competitiveness and excitement from players who all strive to become the richest by identifying a specific card symbol the trump card. Throughout the course of the game, players win or lose money until a point where the richest is determined by the amount of cash he or she has accumulated. The game is set to make market inroads in the US, AFRICA, EUROPE and ASIA.

The idea inception, workflow and production process for this game illustrates the inherent value of teamwork and collaboration, which saw Dr. Ayisi (brain behind the idea) and Mr. Freduah Agyeman Prempeh MA, designer and management professional, utilize the power of specialized software and the Internet to realize a dream. Utilizing the Internet, Dr. Ayisi set up a virtual business, Ideal World Games, LLC, whose network of information and activities encompasses New York, New jersey, Florida, Canada, and China.

So what's next after receiving this award? I ask the gentle genius. “Ghana!” he exclaims, “my country, our country must be the real recipient of the host of innovations and ideas I have under my sleeve.” We click our glasses and toast to the road ahead.