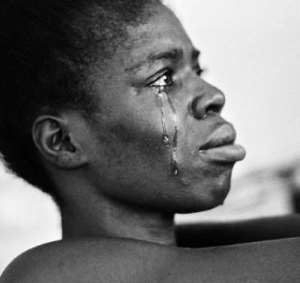 More than two years of civil advocacy, political agitation and parliamentary wrangling, yesterday culminated in an applause in Parliament, to celebrate the passage of the hotly debated Domestic Violence Bill.

It was a sight to behold as female members across the political divide, who are united by their gender sensitivity, flew their handkerchiefs and embraced each other when the Speaker of the House, Mr Ebenezer Begyina Sekyi Hughes, pronounced the bill passed at exactly 11.45 a.m.

The reaction in Parliament was reflective of national relief from years of an emotionally charged debate during which various organisations, such as the National Coalition on Domestic Violence Legislation, The Ark Foundation, Domestic Violence and Victims Support Unit of the Ghana Police Service, Advocates for Gender Equity, LAWA Ghana Alumnae Incorporated, the Ghana Centre for Democratic Development and Living Education Aid Teaching and Counselling Centre assumed frontline roles.

Preceded earlier by many months of public agitation, the bill was introduced in Parliament on Wednesday, May 24, 2006 and referred to the Joint Committee on Gender and Children, and Constitutional, Legal and Parliamentary Affairs for consideration and report.

The motive was to provide protection for women and children, particularly from domestic violence and to promote human dignity in accordance with provisions of the Constitution and internationally acceptable norms and practices.

It also held consultations with various organisations concerned with gender and child issues.

A last-minute attempt by the Member of Parliament (MP) for Sunyani East, Mr J. H. Mensah, to delete Section 14 (2p) of the bill was defeated.

When all was set for the Third Reading of the bill after it had gone through the Consideration Stage last week, the MP for Sunyani West, Mr Kwadwo Adjei-Darko, called for a second consideration stage of the bill and it was during the period that Mr Mensah moved a motion for the deletion of Section 14 (2p) of the bill.

Mr Mensah argued that that provision of the law might not be applicable in small villages and hamlets and called for its deletion but his motion was defeated paving way for the Minister of Women and Children's Affairs, Hajia Alima Mahama, to move for the Third Reading of the bill to ensure its passage.

Besides that, there was a lot of anxiety when the bill was read for the second time in the House last year, during which members of some non-governmental organisations (NGOs) advocating the passage of the bill stormed the Public Gallery of Parliament wearing red bands.

Their action did not go down well with some male MPs who voiced out their displeasure on the floor of the House calling on the advocates not to intimidate them in the performance of their parliamentary duties.

The famous “Alomo Gyata” expression made by the MP for Ahafo-Ano South, Mr Stephen Kwaku Balado-Manu, on the floor of the House that day did not also go down well with a section of the NGOs advocating the passage of the bill.

Hajia Mahama, who was highly elated after the adjournment of yesterday's sitting, told the Daily Graphic that “ I did not believe my ears when the Speaker pronounced the bill passed”, adding, “I had to ask another colleague to confirm whether the bill had really been passed.”

She stated that the passage of the bill meant that the country was making strides on issues affecting the welfare of women in particular and the society in general.

Asked whether the passage of the bill was sufficient to curb domestic violence, Hajia Mahama replied that “there are a lot more to be done after the bill has received Presidential assent”.

“We have to build up capacities of the various agencies to ensure that the provisions of the bill are properly enforced to achieve our objective of curbing domestic violence,” she said.

Hajia Mahama indicated that for victims to take advantage of the Bill, there was the need for sensitisation programmes to be embarked upon so that their rights would not be trampled upon.

The Chairperson of the Committee on Women and Children and MP for Abirem, Ms Esther Obeng-Dapaah, who could not also hide her feelings, said “it has been a very difficult journey since the concept that the bill seeks to propose is new to our socio-cultural practices”.

“Discrimination against women are so entrenched in our part of the world that some people could not understand why such laws should be enacted to protect the interest of women” adding that “to such people domestic problem should not be handled at the courts”.

In her view, February 21, 2007 should be commemorated by women to express their happiness about the passage of the bill, saying that “the bill has given women and children in the country a 50th anniversary present”.

The Minority Ranking Member on the Committee on Gender and Children and MP for Ho East, Mrs Juliana Azumah-Mensah, noted that the bill was gender neutral and allayed the fears of men who had expressed apprehensions about it.

It was not only female MPs who were happy as some of the male MPs also stood in groups to express their joy.

The MP for Bia, Mr M.C. Boampong, said he was happy because the bill would protect the interest of children and house helps. “Both men and women in the country should be happy for achieving such a feat and consider today as an important one on the country's calendar,” he said.