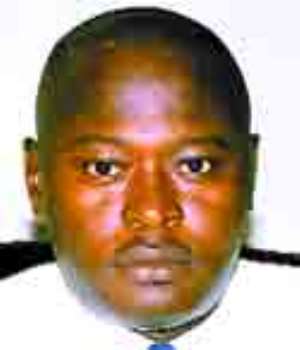 SMUGGLED CIGARETTES represent one third of all the legally imported cigarettes.

Cigarettes are the world's most widely smuggled legal consumer product. They are smuggled across almost every national border through constantly changing routes.

Some governments are now suing some of the tobacco companies for revenue lost due to smuggling activities allegedly condoned by the companies.

In Ghana, smuggling has been on the ascendancy irrespective of measures introduced by CEPS and the government to curb it.

Smuggling of contraband cigarettes into the country cost the Government over US$3.5 million every year.

It has become one of the stumbling blocks to the Government's plan to generate more revenue for the State because taxes and levies supposed to accrue on these goods are not paid.

British America Tobacco (BAT) last year contributed over $30 million to the economy through taxes and levies paid on cigarette products it manufactured in the country.

The $30 million covered 85% of the market and therefore Government lost taxes on the rest (15%) to smuggling of cigarette products into the country estimated to be about $3.5 million.

Smuggling of cigarettes and other tobacco products has, over the years, attracted the highest indirect taxes and by the 1990s were contributing an average of 5.9% of total government domestic revenue.

This has been one of the reasons for smuggling of cigarettes into Ghana. According to the sole local manufacturer of cigarettes, British American Tobacco Ghana, last year contributed an average of ¢22 billion monthly in excise duty alone.

About 160 million sticks of cigarette are smuggled into the country every year without payment of duties therefore leading to those huge losses to Government.

Reasons offered for this state of affairs were the porous nature of the country's borders and the non-enforceability of laws especially on smuggling and non-introduction of competitive taxes.

However, with education and enforceability of laws, the losses would be curtailed to the barest minimum. The main entry point for the contraband goods is the Eastern frontier where cigarettes and textiles are smuggled through border towns like Aflao, Kpalime, Tindjasi, Sankasi/Bawku and Bole/Tsatsi borders.

However, the Western frontier had no problem with smuggling because prices of such products are already high in Ivory Coast and some parts of Burkina Faso. It is because of these problems that CEPS introduced programmes and advertisements on radio to educate people to patronise legally registered products manufactured in Ghana.

The growth of tobacco demand in Ghana has been stable, recording a 1.1% growth per annum last year. This means there was a decline in the smoking incidence in the country and this development is attributed to social stigmatisation of smoking cigarettes and the high level of taxes.

Cigarettes and other tobacco products have over the years registered higher taxes including VAT, import duty and excise duty. But this has reduced over the years to 140% as excise duty in 2000 from as high as 175% in 1991 of the ex-factory price to distributors. Thus, on each stick of cigarette sold, government revenue alone could amount to as much as 80% of the selling price.

According to a World Bank report, increases in tobacco excise rates are often included as a component of fund-supported stabilisation programmes for countries that need to mobilise additional tax revenue to reduce the fiscal deficit.

Excise rates on tobacco products may be increased primarily to raise revenue.

But in setting tobacco tax rates, governments need to take into account several factors, including the impact of smuggling, cross-border shopping, and duty-free purchases on ferries and planes. It is in the interest of governments to reduce tobacco smuggling not only to increase excise revenues but also to limit the loss of revenues from other taxes, including income and value-added taxes, as underground transactions replace legal ones.

Ultimately, tobacco excise tax rates must reflect the purchasing power of the local consumers, rates in neighbouring countries, and, above all, the ability and willingness of the tax authority to enforce compliance.

With respect to the structure of tobacco excises, countries should tax all types of tobacco-cigarettes, cigars, pipe tobacco, snuff or chewing tobacco, and hand-rolling tobacco. The best international practice is to impose excises on the destination basis under which imports are taxed and exports are freed of tax.

Excises can be either specific taxes (based on quantity) or ad valorem (based on value). If a primary purpose of excise is to discourage tobacco consumption, a strong case can be made for specific excises that would impose the same tax per stick.

Specific tax which is to be implemented by Ghana this year, is easier to administer because it is only necessary to determine the physical quantity of the product taxed, and not its value. Ad valorem taxes, however, may keep pace with inflation better than specific taxes; even specific taxes that are adjusted fairly frequently.

The high excise duties in the country has led to the high rate of smuggling especially from Togo where its Lome Port is a free port hence businesses do not pay excise duties on imports.

The 2007 budget stressed that a bill will be passed to convert excise tax on alcoholic drinks, malt drinks, carbonated soft drinks, cigarettes and other tobacco products from the current ad valorem regime to a specific rate structure to bring it in line with international trends.

It is still early times to predict how the new tax system will be structured but the Deputy Minister of Finance, Dr. Anthony Osei Akoto, has assured that the tax regime would benefit the government and the tobacco importers as well.

If government's objective is to protect and sustain its revenue base and perhaps address the health challenges posed by smoking then it should as much as possible, involve the locally registered tobacco companies in working out the implementation details to ensure that the smuggling problem is addressed.

Contrary to expectation, the high taxes have not deterred smokers. Rather, it has promoted a very lucrative smuggling business in cigarettes.

With British American Tobacco Ghana's exit from local manufacturing on 22nd December 2006, the floodgates have been opened for cigarette imports to fill the vacuum.

To bring sanity into the system, Government should introduce and enforce a policy, which permits only brands of legally registered companies to be sold on the market. Vigilance and commitment of the Customs, Excise and Preventive Services (CEPS) would make it possible. Adequate resources such as qualified personnel and logistics should be provided.

To encourage upright persons within the Service to remain focused on promoting the national interest even when the devil dangles very tempting offers before them, I recommend that adequate incentive and reward schemes with clear-cut guidelines should be provided.

With the introduction of a whistle-blower scheme into the service, bad nuts whose actions give a bad name to the service would be caught.

To serve as a deterrent to smuggling, it is about time we give teeth to the law (PNDCL 330 Section 243 and Section 245), which requires that on confiscation, the smuggler is to pay a 300% penalty on the value of excise and import duty evaded. In addition, the smuggler is to pay the excise duty of 140% and import duty of 20%. My preference is the jail term of five years or more for anyone found guilty.

The initiative by CEPS in getting Philip Morris International (PMI) to sign a MoU after the destruction in November 2006 of seized counterfeit Malboro cigarettes valued at US$ 20 million was therefore in the right direction and should be extended. CEPS must ensure that PMI is accountable for the illegal presence of its Bond Street brand on the Ghana market then the hullabaloo that greeted the signing can naturally die down.