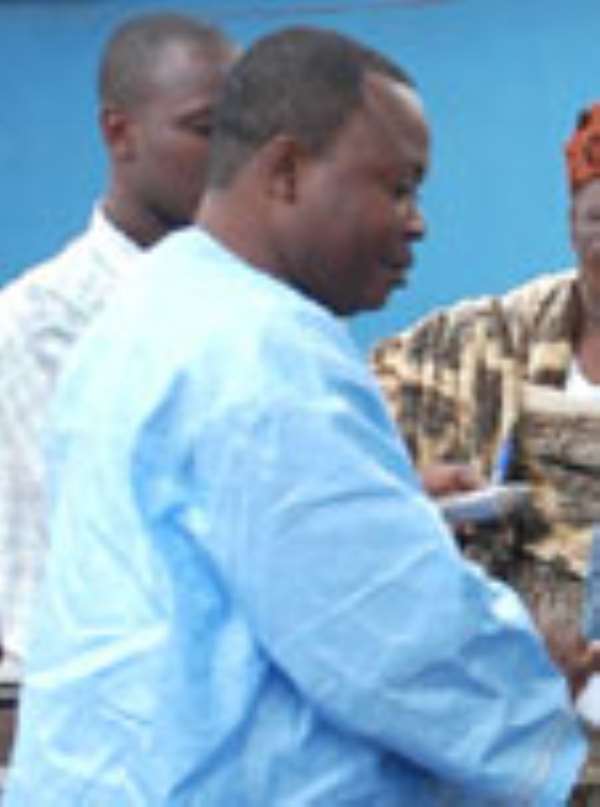 THE ACTING President of Anlo Traditional Council (ATC) and the Regent of Awoamezi Stool, Regent (Fiadomegatala) Sri III, has urged the youth of Afiadenyigba in the Volta Region to use their God given talents and influence to unite and solve the chieftaincy disputes in the area.

According to him, since disunity retards the nation's progress, all efforts must be made by all well-meaning Ghanaians, including the youth to solve problems of the sort, adding that, “petty squabbles and quarrels would not solve our problems. It would not help us to forge ahead on developmental issues. We should ask for God's wisdom to settle our chieftaincy issues,” he admonished.

Regent Sri made this admonition last week Friday in Accra when he led the Anlo Awoamefia Hogbe Development Trust Fund to fulfill a pledge of ¢50m to the people of Afiadenyigba, a town in the Volta Region towards their electrification project.

Bemoaning the low level of education in the Region which had warranted the establishment of the Fund, he said it was meant to help brilliant but needy students more especially the less privileged and those who started some form of skills training but could not continue as a result of financial constraints.

Let us put ourselves together to build our State so that we can have enough reserve and extend it to others as well,” he said.

To him, the presentation of the money to the Afiadenyigba Youth Development Fund was a demonstration of the pledge he made on behalf of the Fund which was to promote and enhance not only the prospects of the Region but the educational status of the brilliant but needy students.

Presenting the cheque for ¢50million to the leadership of the Afiadenyigba Youth Development Fund, the Chairman of the Hogbe Development Trust Fund, Dr. Lennoix Agbosu, noted that within a couple of months that the Fund was established, it had received a lot of applications but was quick to say some of the applicants did not meet the criteria and the objectives of the Fund.

To this end, he urged all the potential applicants to do their best to satisfy the laid down criteria and objectives of the Fund to avoid any disappointment.

Dr. Agbosu expressed grave concern about how others needed the Fund to school outside but could not satisfy the criteria.

He commended the Regent for having the initiative to establish the Fund to boost education in the area and raise the standard of the Volta Region.

The Youth Leader of the Association who doubles as the Assistant Headmaster of Afiadenyigba Secondary School, Mr. Emmanuel Damalie received the cheque in the company of some of his members and residents from the area.

He commended the Regent for extending the gesture to the community.
According to him, the pledge and its fulfillment within a matter of months, demonstrated the absolute commitment of the Regent to help develop the area.

Mr. Damalie, who praised the Regent and his entourage for paying a courtesy call on them last year, called on other traditional leaders to emulate the Regent.

He presented five smocks to the workers of the Anlo Traditional Council, three bottles of schnapps, a bottle of local gin and a ram as a token of appreciation of what the Regent, through his Council has done for the community.

A Member of the delegation promised that the money would be used to the benefit of the community and pledged that by April this year, the community would be commissioning the project.

It would be recalled that the community made the appeal last year to enable them get electricity for the area, to help curb the menace of thievery and armed robbery.

They made the request when the Regent paid a courtesy call on the people of Afiadenyigba last December and exchanged seasonal greetings with them.