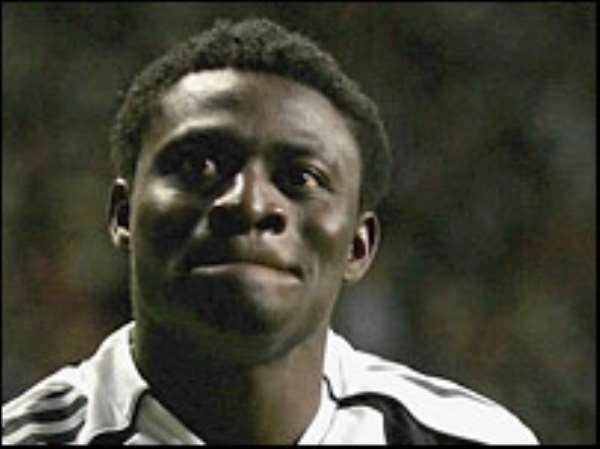 Nigerian striker Obafemi Martins maintained his impressive scoring run in the Premiership at the weekend.

Martins scored his tenth goal of the season for Newcastle United at Fulham, but it was not enough for them to avoid a 2-1 defeat in London.

The result left them 10th in the standings.

Fellow Nigerian Yakubu Aiyegbeni added to his goal tally with his 11th strike of the season in Middlesbrough's 1-1 draw against Arsenal.

The former Portsmouth striker put his side in front from the penalty spot before Arsenal captain Thierry Henry rescued a point with an equaliser.

Watford striker Hameur Bouazza, who has accepted an invitation to play for Algeria, could not inspire his side to victory as they lost 1-0 at home to Bolton Wanderers to remain at the foot of the standings.

The French-born forward is set to win his first cap in Wednesday's match with Libya.

It was a disappointing weekend for Mali's highly-rated defensive midfield player Mahamadou Diarra of Real Madrid.

Diarra, signed from Olympique Lyon in the close season for the highest fee paid for a Mali international, clumsily gave away a penalty from which Levante scored to win 1-0 at the Bernabeu.

The result left Real five points adrift of leaders Barcelona who played out a goalless draw with mid-table Osasuna.

Freddie Kanoute's Sevilla side missed a chance to regain top position, as without the Mali international, they were unable to find a way past Claudio Bravo in the Real Soceidad goal.

Sevilla remain one point behind the Catalans.

Cameroon international Joseph-Desire Job struck a second-half goal to level the scores after Batefimbi Gomis had opened the scoring in the 10th minute for high-flying St Etienne.

However, an own-goal by Senegalese defender Lamine Diatta with 18 minutes remaining gifted Sedan only their third victory of the season.

Although they remain bottom Sedan closed to within four points of safety.

Keita struck the second goal in first-half injury time, with Tunisian Issam Jemaa completing the scoring in the dying seconds of the match.

The win meant Lens closed the gap at the top on leaders Olympique Lyon to 11 points after they were surprise losers against Troyes.

Ivorian Kanga Akale struck a late consolation goal in Auxerre's 2-1 defeat by Monaco who leap-frogged Akale's side and are now 13th.

His compatriot Karim El Ahmadi was also on target in the 33rd minute for FC Twente who won 2-1 at Exelsior Rotterdam.

Congo-Brazzaville strikerPatiyo Tambwe had put Lokeren in the lead after 24 minutes.

Three of the four goals in the game between St Truiden and FC Brussels were scored by Africans.

Rwandan Henri Munyaneza and South African Asanda Sishuba scored for St Truiden, while DR Congo?s Zola Matumona was on target for Brussels, who came twice from behind to draw 2-2.

Portugal
Cape Verdean striker Dady scored in the 9th minute as his side Belenenses snatched away points at Vitoria Setubal.