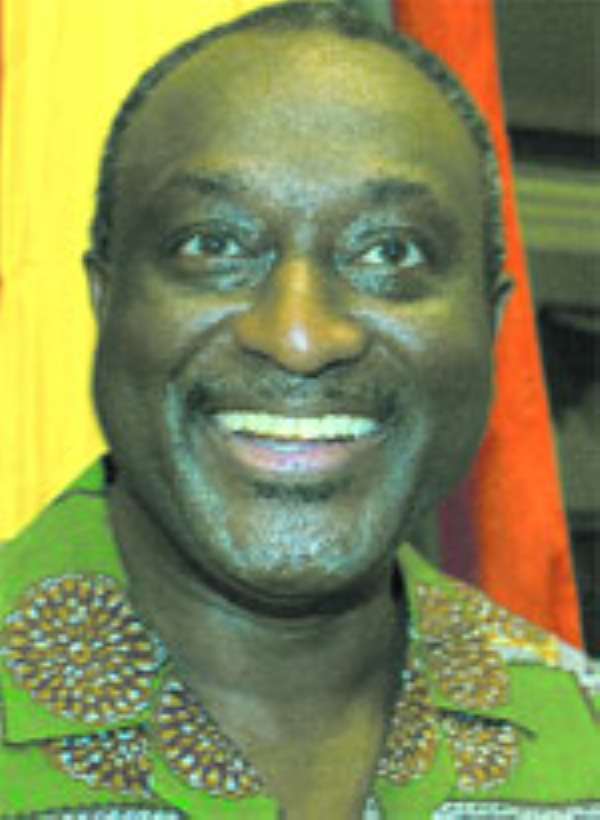 Matched only by Oquaye's Indian industrialists friends, Allan is spending as if he prints money, and justifying suspicion of unfair support as records show he has only a modest six bedroom guest house at West Legon, no record of assistance as accomplished chieftains like Hackman and Agyarko and zero net savings from his Empretec days to justify big spender status.

From Simmons Yussif Kewura, Sunyani
IT HAD BEEN an item for the last five years; then it faded from the rumour mill, resuming some time in 2005, and then finally returning with a vengeance in the last few weeks with some element of certainty – the long powerful hand of The Castle, the seat of Government cheering in the corner of Allan Kyeremanten, the Minister of Trade, Industry and President's Special Initiative, and a true son of Asante now making an unconvincing connection to a long-lost Fante root as if his life depends on it.

Speaking to The Chronicle in separate exclusive interviews, leading members from the camps of some of the New Patriotic Party (NPP) Presidential Aspirants (names withheld) who are in a position to know, have told this reporter that the President was not only lending his support to the Minister, but could be helping underwrite his campaign activities.

The Chronicle learnt that material resources such as motorbikes, bicycles and money were being extended to Allan through the Eastern Regional Treasurer of the NPP, one Dr. Yaw Annor, whom the aggrieved Aspirants tagged as Campaign Coordinator of Allan.

The Chronicle can report that as part of his campaign strategy, Allan had supplied quantities of rice to various regions and constituencies in the country, which has benefited some members of the party from the Brong Ahafo Region, a key region in the party's struggle for supremacy between itself and the National Democratic Congress (NDC).

Currently, among the aspirants, Allan's campaign has been tagged as the most lucrative and expensive of all the 19 aspirants.
This has led to the defection of members and delegates of the NPP falling into the hands of the man, sometimes described as 'Golden Boy,' leading to the front line status of Allan in the pantheon of NPP majors struggling over Kufuor's garment.

When the paper reached Dr. Annor on phone, he confirmed that he is in the Allan Kyeremanten camp but denied the allegation, stating that all the speculations were not true: “There's no iota of truth on what they are saying”.

He also refuted the characterization of him as the campaign Coordinator of Allan's team.

According to Dr. Annor, the structures were not yet set up for the campaign activities for them to know who heads what.

Dr. Annor, a resident of the Eastern Regional Capital of Koforidua warned that such attitude of spreading false information would damage the reputation of this country.

Chronicle sources disclosed that about 230 motorbikes, one each for a constituency and 1,840 bicycles, 8 for each constituency had been acquired for distribution throughout the country.

The market price for a bicycle is currently pegged at ¢500,000.
The motor bikes, as revealed would be distributed to his coordinators in the constituencies to facilitate campaign programmes there.

Only Mike Oquaye has been able to make a similar investment in resourcing the party, not only once in 2001, but yet again in the last few months.

The Chronicle was also told that the Trades and Industries Minister last year met all NPP Regional Women Organizers and donated ¢5 million to each of them, as a way of asking them to campaign for him, a figure matched only by the deep pocket of Professor Mike Oquaye, who has flown very low behind the Castle radars, but who is known to have generous backing from Indian industrialists and philantrophists.

The questions being asked by the other aspirants were that if it was not the castle that supports the minister, who else was doing that? They also queried where Alan was getting such huge monies to finance his campaign.

It was also noted that Alan, before entering into politics, was the Managing Director of Empretec, which office they doubted could earn him so much to spend lavishly on his Presidential ambition.

'Yes Simon, Allan and I shared an office block at Adabraka belonging to The Quarteys, when he commenced his consultancy before linking up with John Young and Associates, from there he landed the Empretec business in Ghana, and ultimately Enterprise Africa Project,” Coomson stated.

Kofi said he is not in close contact with Allan and most of the candidates who climbed on his back to pick the apples of power when they could not even speak under the Rawlings administration.

He recalled that he and another friend, Kofi Boakye of the Young Executive Forum then under a Kyeremanten Presidency, who informed him (Allan already knew) that he had been penciled in as Ambassador to the US by newly sworn-in President Kufuor. That was the first clue of a possible Kufuor and Allan link.

Kofi explained that Allan knows that he Kofi Coomson knows all about his links because he (Kofi) encouraged Allan to run for President after he rejected calls on him by the YEF to challenge Kufuor for the Presidency on the wings of the now collapsed YEF, and instead turned over his support to candidate Kufuor because Allan had then just turned 42, and had no backbone, nor a house of his own.

“If Kufuor is supporting Allan now, then it is probably pay back time, and I find nothing wrong with it in principle, unless there is evidence of bending rules or breaking the law,” he argued.

Turning to Kofi, whose record of personal association with all the aspirants and NPP old and newcomers is acknowledged, the former Editor-in-Chief confirmed his relationship with Allan and his wife even before he started The Chronicle (formerly The Ghanaian Chronicle), adding that he has on occasion accepted invitations from the couple to speak to the Rotary Club, and that he and his friend and former business partner Nana Antwi Darkwa and former deputy Minister of Transport Mr. Mike Hammah were the first set of beneficiaries of Allan's Empretec Training programme.

Allan's detractors are however quick to question Allan's source of funding.
It was suggested that Alan could pump the money into the NPP to build up the party, but that should not be channelled to his individual desire to enhance his presidential ambition.

Most of the aspirants in their bid to getting their way through as Presidential candidates had pumped monies into the party before, but not individuals and thus they expect the latter to do same.

The Presidential aspirants had also called on the President, to distance himself from the NPP Presidential race to ensure a level playing field for all aspirants, a call that was made at an NPP meeting in Achimota, Accra, where Madam Hawa Yakubu in her famous and characteristic frankness pleaded with President Kufuor to allow the competitors a free rein and desist from supporting any one of them.