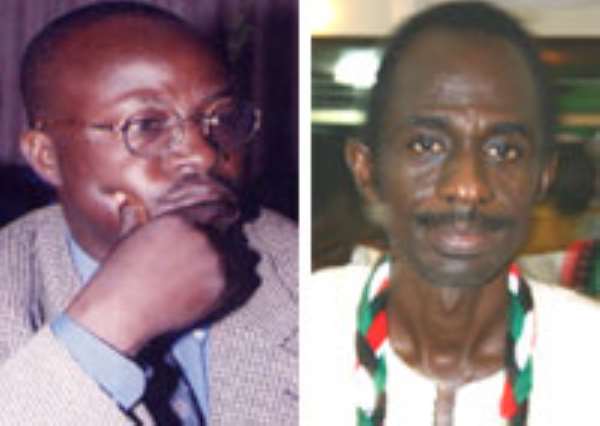 THE VOLTA Regional Chairman of the New Patriotic Party, (NPP) Mr. Kenwuud Nuworsu, has asked the Volta Region branch of the National Democratic Congress (NDC) to prepare for tough competition in the 2008 general elections and cautioned that the NDC would not have it easy at all.

The Regional NPP Chairman expressed the Party's readiness to defeat the NDC in their strong hold as it would add more seats to the existing one in the Nkwanta North Constituency, as well as win majority presidential votes to retain the party in government.

Mr. Nuworsu, who said this in an exclusive post conference interview with The Chronicle in Ho, hinted that the NPP was studying the chemistry of tribal and ethnic lines on which people vote in the Region, as a strategy to understand the people upon which the party would surprise their major political opponents.

The NPP Regional Chairman explained that the inability of the NPP to win more seats in the past elections could not be interpreted to mean that the NDC was stronger and popular than the NPP, and said it occurred as a result of internal problems that the party faced at the time.

Mr. Nuworsu reminded the NDC that the monopoly it has enjoyed in the Volta Region in the past was over because over the years, the NPP had become firmly rooted and was equally popular among the people, based on the sound policies of the party.

He said the people in the Region have seen practical evidence of the NPP in the Region in terms of development and could judge whether the NPP or the NDC did better in helping to improve on their standard of living.

Mr. Nuworsu said the numerous development projects the party successfully executed in the Region such as construction of school blocks and roads and those that were on-going would definitely help the people to make informed decisions in the next elections.

Mr. Nuworsu disclosed that a constituency special delegates conference would be held sometime this year, noting that the announcement made by the National Executive at Koforidua that names and pictures of delegates to the National Congress should be submitted before March, has created fear and panic among some members.

He said the announcement has temporarily made political activities slow down in the Region and emphasised that when campaign started in full swing, the NPP would adopt an open ended democracy but would be strongly guided by the party's laid down principles.

Mr. Nuworsu assured the electorate that the NPP was prepared to contain any form of anxiety and deal with unforeseen problems that might emerge; “you know, most people admire the NPP because of its sound democratic practices”.

The Volta NPP Chairman said the Koforidua conference was very helpful to the delegates because it was highly refreshing and timely as it rekindled patriotism and loyalty among them as well as prepared their minds towards what he called the task ahead of the party to win the elections.

Contributing, the Volta Regional Women's Organiser of the NPP, Madam Joyce Dorkenoo, also expressed the hope that her party would win the 2008 elections, adding that already a number of women have been trained at the constituency level to retrain polling agents at the constituencies.

She said since women dominated the population, it was applicable also in the Region that women were more than the men.

She promised to do everything possible to win the conscience of the majority of them to vote for the NPP in the next election.

Madam Dorkenoo pointed out that the NPP had left positive marks in the Region such as the introduction of the capitation grant and the school feeding programme, which she noted brought relief to parents and made pupils comfortable in school.

The Women's Organiser said “The present is always seen but the future is not known” and was sure that the people would like to continue to enjoy the achievements of the NPP because if they decide to deprive themselves of all this and vote for their opponents, then they should realise that they would have committed a big mistake.