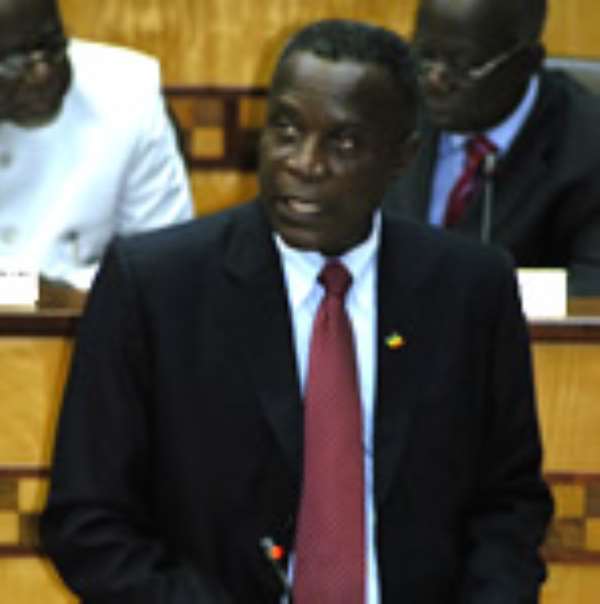 Mr Kwadwo Baah-Wiredu, Minister for Finance and Economic Planning, yesterday condemned the practice of counterfeiting and piracy, saying its effects were grave on the national economy and the lifestyle of the citizenry at large.
He said not only did the perpetrators of the heinous crime committed massive fraud on legitimate traders, but also such activities amounted to serious public deceit, undermining of the economy and posing a great danger to the people.

Mr Baah-Wiredu was speaking at the launch of an anti-piracy and counterfeiting campaign yesterday in Accra, to mark the International Customs Day, which is observed on January 26, every year. He said "It is only a criminal, malicious and an inhuman mind that will fake items or manufacture fictitious items for human consumption. Their activities on daily basis violate the universal moral code and good conscience."


Mr Baah-Wiredu noted that the dangers posed by the steady increase in counterfeiting and piracy required that stakeholders intensified their efforts to combat the practices.


He said the practice imposed a lot of responsibility on the Customs, Excise and preventive Service (CEPS).


Mr Baah-Wiredu, therefore, urged CEPS to implement efficient, intelligence and investigative measures that would enable the service decisively deal with breaches of existing legislation on piracy and counterfeiting. He said such measures, must aim at protecting 'rights holders' and industry as a whole and recommended that CEPS should institute a unit to expeditiously handle issues regarding piracy and counterfeiting.


Mr Baah-Wiredu said such initiative should form a critical aspect of a medium to long-term programme for building the professional competence and the needed capacity to battle the menace. He said the fight against counterfeiting and piracy should be through the adoption of coherent and co-ordinated strategies within a collaborative framework of identified security agencies with CEPS at the helm of affairs.


Mr Baah-Wiredu asked CEPS to consider the enforcement of the laws on counterfeiting, and piracy that was part of their mandate as an important component of their community protection responsibility. He urged all stakeholders to intensify efforts to ensure that regulations regarding proper labeling of imported goods were adhered to.


Mr Emmanuel Doku, CEPS Commissioner, said piracy and counterfeiting has now been recognised as two of the most serious crimes being perpetrated in international trade. He said it was estimated that the total world trade in counterfeit goods now exceeds 500 billion worldwide.


He said for maximum effect, CEPS intended to increase co-operation with its stakeholders and thus called on agencies and individuals that dealt with issues related to intellectual and property rights to work closely with the service to stem the menace.


The International Customs Day is an annual event during which major challenges facing global Customs administration are brought to the fore and thoroughly discussed with the view to finding solutions.


The Day is an important event on the World Customs Organisation's calendar. This year's celebration was under the theme: "No to Piracy and Counterfeiting".