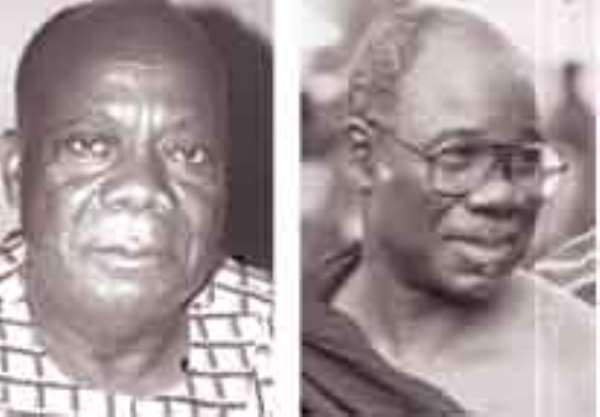 The scramble for the presidential ticket of the ruling New Patriotic Party (NPP) has begun and as expected, interesting developments are beginning to unfold. We are beginning to hear stories about how the party was formed, who were the initial signatories for the formation of the party, who were among those who drafted the party's constitution, in whose house the constitution was drafted and in whose house the name of the party was adopted.

Not too long ago, the Member of Parliament for Offinso North, Hon. Dr. Kofi Konadu Apraku, was in the news for trying to make capital out of his contributions drafting of the party's constitution. His comments generated some amount of controversy since there was a debate over whether he had said he single-handedly drafted the document or he was part of those who did it.

It is therefore not surprising that an Aspirant like Hackman Owusu Agyemang, MP for New Juaben North and Minister for Water Resources Works and Housing would quickly remind all that he was among those who drafted the document.

In fact Hackman says, the discussions that finally led to the adoption of the elephant as the symbol of the party was done in his house.

He actually was in the Sarfo Adu group that proposed the current symbol as opposed to the Adu Boiahen group that was in favour a symbol that would have been “two heads are better than one, or in Twi, “Tikro nko agyina.”

But the latest and most interesting development on this issue of who did what, who can what and who should do what in the NPP, has been the recent contradictory statements made by two respected men of the party, Merrs Apenteng Appiah-Menka, Chairman of the Ashanti Region Council of the NPP and Harona Esseku, the Immediate past National Chairman of the party as regards the possible flagbearership aspirations of the sitting Vice Preside Alhaji Aliu Mahama.

The first to come out on the issue was Appia-Menkah. The Kumasi based industrialist who had troubles with the regime of former President Jerry Rawlings, had told sent what was described as exclusive statement to The Chronicle. In that statement he was reported as having condemned what he saw as ethnocentric comments among people.

The regional Council Chairman had attributed the trend to the omission of the name of the Vice President by the President during a rally speech in Koforidua during which he named some people as being those whose turn it was to lead the party.

In that release, as was published by The Chronicle, Mr. Appia-Menkah said by virtue of certain conventions that were adopted to suit local conditions during the drafting of the party's constitution, the sitting Vice President was an automatic runner in the presidential race of the party.

Considering his stature in the party no one could have ordinarily disputed the assertion of the industrialist who is, by all standards, a true red, blue and white NPP man.

“He Vice President should be prepared for a competition,” Esseku was reported to have said.

But in all this, the question that Dr. Asebu would want to ask is, who is who? Who is right on this matter? Should we take the words of the regional Council Chairman or the past National Chairman of the party? I believe these are just the gist of the events that would unfold as we move gradually to the day when the one to lead the party for the 2008 elections would be finally chosen by delegates.