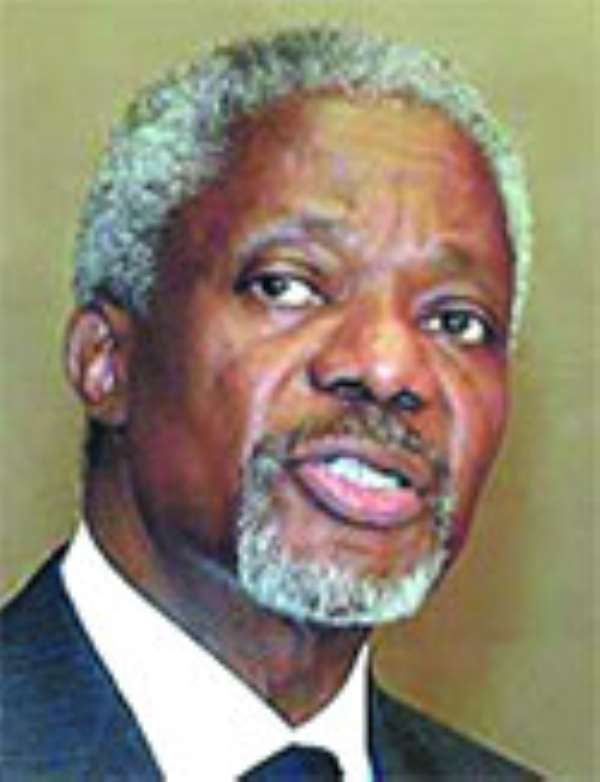 The immediate past Secretary General of the United Nations (UN), Busumuru Kofi Annan, who ended his diplomatic career with the world body in December last year, did a surgery of the past and present situation of the African continent yesterday.

In a carefully worded speech delivered at the Accra International Conference Centre in commemoration of the fiftieth anniversary celebration of the nation's Independence, the former UN leader analysed the problems that had bedeviled the continent over the years and the positive strides being made in all spheres of human endeavour by a host of African countries.

He indicated that the continent was the most deprived in the world and reiterated the need to make new resolutions that would ensure a renaissance of the continent's past glories.

To ensure the forward march of the continent, Mr. Annan emphasized the need to adhere to the principles that would ensure the attainment and preservation of what he postulated as the three main factors necessary for the continent's rebirth.

He identified the factors as Development, Security as well as Human Rights and the Rule of Law. He observed that it was time for Africa to realize that Human Rights, “were also our rights,” and therefore needed to take the appropriate steps to preserve those fundamental rights.

He said the three conditions were very vital for development and were intertwined in such a manner that development could not be ensured without having all the three in place.

On Security, he emphasized that, “no one would want to invest in a bad neighbourhood,” and advised that as conflicts continue to reduce on the continent, the leaders should focus on ensuring social and economic development.

He lamented that Africa was the only continent that had not yet experienced the Green Revolution despite all the potential it possessed but noted that there were indications that the continent was ready for a sound and successful take-off.

He specifically appealed to the leaders of neighbouring Ivory Coast to put their nation first and ensure the restoration of peace in the war torn country saying, “That is what the people demand and what they deserve.”

Mr. Annan, who spoke about the HIV/AIDS situation, Child and Maternal deaths, malaria and a host of other problems bedeviling the continent, used the opportunity to express his gratitude to the people of Ghana for the support given him.

He said he could not have expected more than the honour done him by his fellow citizens and promised to contribute his quota to the development of the country.

The function was attended by the President, Mr. John Agyekum Kufuor and other key political leaders of the country from both the ruling and opposition parties, religious leaders, members of the diplomatic corps and a host of others who used the opportunity to welcome him and to listen to his first speech to the nation after his retirement from the UN.

The full edition of Mr. Annan's speech would be carried by the Chronicle on Monday.