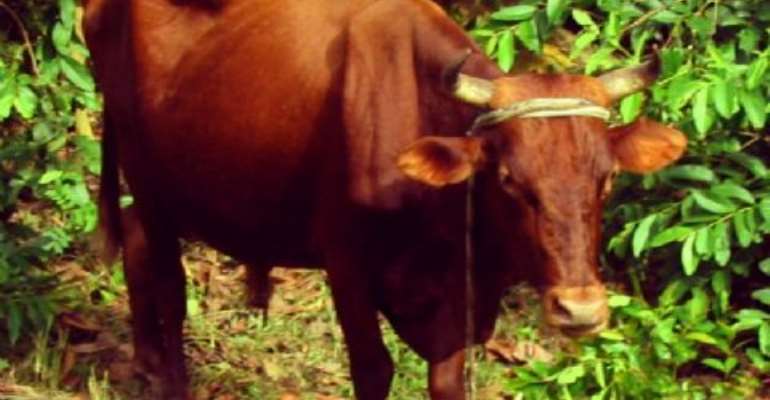 A stray cow that broke into a room of a house along the beach near the Independence Square in Accra, has been arrested by the police for "unlawful entry and causing harm."

The cow did not break into the room to steal but ended up destroying various property worth millions in the room.

The stray cow was grazing on a little hill behind the house but it somehow climbed the roof of the building, which caved in beneath it.

In an attempt to get out of the room the troubled cow went wild and destroyed almost all the property in the room including a television set, video cassette player, and personal effects running into millions of cedis.

As if that was not enough, the cow hit a member of a police team that was deployed to effect its arrest.

A few hours after its arrest, it was granted police bail.

The owner of the room, Diana Sappor, 35, food vendor, who was at that time outside the house, located at Mensah Guinea, near the beach, heard a deep sound that came from her room and when she went in to see the cow in the room, she locked the door and went to the Ministries police to report.

Chief Superintendent Angwubutoge Awuni, Accra South Divisional Police Commander told The Spectator that the owner of the cow, Yussif Abdallah, 35, a tailor who lives at Accra New Town, who had come to the police station when he heard about what had happened, was arrested for allowing his animals to go stray, which is against the laws of the land.

He said once the owner had been found, there was the need to grant bail to the animal, while Abdallah faces the full rigour of the law.

Mr. Awuni said that the Criminal Code, Act 29, Section 300 frowns against stray cattle found at any public place without any person in charge thereof, stressing that the law mandates any peace officer or health officer to seize and impound the cattle in any common pound, and should detain it until the owner pays an amount to the Attorney-General's Department.

The Commander said that the owner of the cow is therefore guilty of the offence of straying the animal, as well as causing damage to property.

Mr. Awuni expressed concern about the way animals are left to stray in the city centre for instance, which he said have taken over the streets and pavements and thereby preventing vehicular and human movements.

He stated that it is the responsibility of Metropolitan, Municipal and District Assemblies to enforce the laws that prevent animal from grazing or straying in the heart of cities and towns.

He said the animal rearers should be made to understand that they can not rear their animals in those areas, and know that when they are found violating the laws they would be dealt with as stipulated in the criminal code, saying that the police is prepared to take them on if they breach the law.

We’re passing a law to nib LGBTQI+ activities in the bud — B...
37 minutes ago