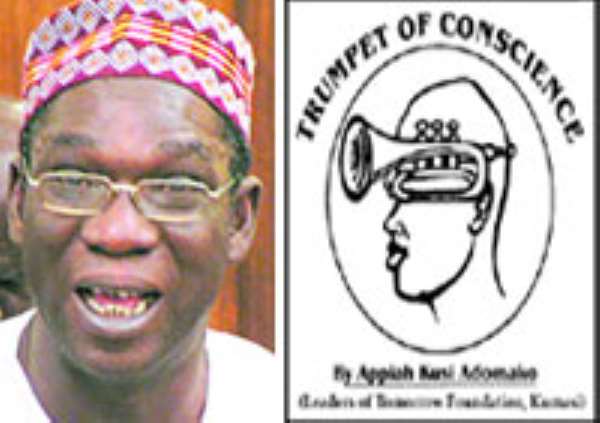 THE AVEYIME Rice Project has hit the media landscape again. This time it is not an issue of the Chief State Attorney prosecuting former Members of the NDC for causing financial loss to the State but rather it is what appears to be the wasting away of Aveyime rice project.

The glorious potential of the US$22 million rice cultivation project by the Quality Grain Company Limited remains unexploited six years after the NPP administration investigated the State sponsored investment in the project and promised to restore it to a good level of productivity.

QUALITY GRAIN PROJECT- BROKEN DREAMS?
The motivation for the establishment of the Quality Grain Project was to produce quality rice here in Ghana, reduce our dependency on imported rice and also put bread in the basket for the people in the twenty two surrounding communities. But today, broken dreams and shattered aspirations litter the faces of people living in these areas. To the people living in the area, life has been like walking on a long corridor with no exit sign.

Six years since some members of the NDC government were convicted and sent to jail and assurances given by the Kufuor administration that the large tracts of land and equipment would be put to use, the project is yet to see the light of the day.

The recent JOY FM visit to the project site at Aveyime in the North Tongu attests to this. We are told that the mill produces four hundred bags of rice daily, which was a far cry from the 1,200 bags it could produce in one hour.

The vast stretches of land secured by the State, plant and equipment at the main site of the project have since been abandoned and the equipment bought for the project left to rot whilst the three Nissan Patrols for the project are currently been used by the Adidome District Assembly.

Other astonishing facts of this project are, that the mill processes about ten tonnes of rice every hou, accounting for over four hundred bags of rice a day and generating some 200 million cedis in the three-month-a-year season.

This is taking place against the background of these constraints meaning if proper care and more resources both human and materials are injected in to the project it has a great potential contribution to our economy.

IMPORTED RICE
The revitalization of the Aveyime Rice Project is the solution to Ghana's heavy dependence on imported rice from China, US, Vietnam etc.

I am always worried to hear our leaders making huge noises about the amount of foreign exchange spent importing rice but our actions to mitigate this are rather lukewarm. Last year, it was reported that the total rice import for the year was US $250 million cedis which is far more than total budgetary allocations for Ministries of Food and Agriculture, Interior, Attorney General and Justice, Women and Children Affairs.

We have been reluctant in approaching this problem.
When President Kufuor came into office, there was a nation wide campaign to popularize made in Ghana rice and other local goods and services. Sadly enough, today this campaign has died down.

One should not be surprised if a visit to the kitchens of our politicians reveals all shades of imported rice from Sultana to Chicago Star. That is 'patriotism made-in-Ghana' for you.

When Major Courage Quarshiega was the Minister for Food and Agriculture, he did all humanly possible to make the local rice a competitive alternative to the imported rice. May be the reason why government has not been acting well enough to save our local rice industries may be because a party bigwig or an influential party contributor imports rice or other goods and needs the enabling environment provided by the absence of local alternatives in order to prosper and pass some on to party. This is where we are after almost 50 years of self-governance. So maximize our selfish interest and minimize the national interest.

BACK IN JUNE?
The Honourable Minster of Food and Agriculture, Ernest Debrah on Monday's edition of the Daily Graphic said that the Aveyime Rice Project would be back in June this year. Can this be taken as one of the 'in the pipeline' or 'plans are far advanced' statements which characterize our leaders and politicians' speeches? If the Minister is really true to his word then the people of Ghana would appreciate the deeds of the minister.

It would serve Ghanaians well if the Honourable Minister could be true to his words. This is so because Ghanaians are fed up from the stale bread of empty political oratory, which sees nothing achieved. We want to see the Quality Grain Project bounce back so that we can downsize our rice imports.

More so, we the people ought to free ourselves from the notion that imported goods are better than local ones.

To achieve this, we need to sacrifice and start patronizing the local products however poor the quality is. We need to popularize local rice. Or shall we can consider banning all outdoor and other media advertisements for imported rice? May be!!

CONCLUSION
Let us help to revitalize Aveyime Rice Project!! Let us sacrifice our taste for imported rice! Let us help make Ghana better! Let us buy made in Ghana goods! For there is strength in solidarity!!