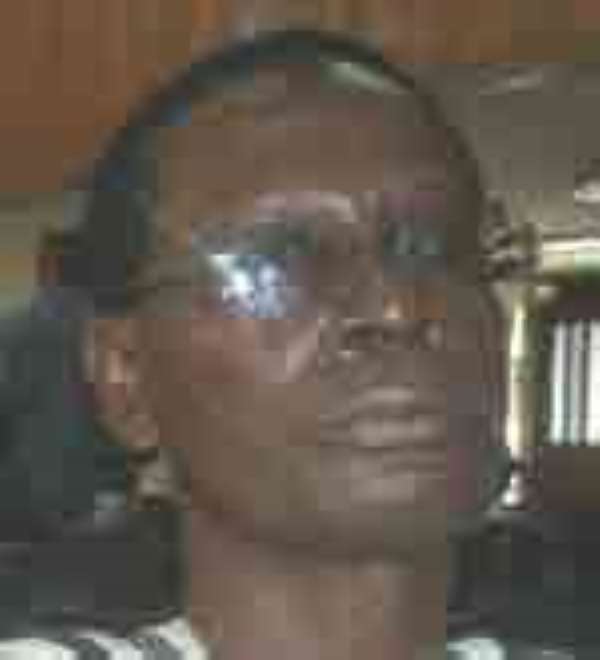 THE ASANTE Akyem North Constituency Secretary of the National Democratic Congress (NDC), Alhaji Daniel Braimah, has said that the NDC is targeting 30% of the votes in the Constituency.

He said the NDC obtained 30% of the votes in 1992 and 1996, culminating in it clinching those victories.

Alhaji Braimah, who disclosed this in an exclusive interview with The Chronicle at Konongo, said the Constituency is a difficult one for the party and thus required hard work, dedication and commitment from all to make their objective a reality.

He said the NDC's campaign would dwell on bringing people together because the nation is currently polarised because of rival political parties and advised that, 'being in different political parties should not make us enemies'.

The NDC Scribe, who is also known as Belii, said the leadership of Professor Atta-Mills would address the polarity because he is an advocate of peace.

Alhaji Braimah said some of them were not happy with the Koforidua episode and had both prayed and hoped that it should not be repeated. He however, cautioned against complacency following the NDC's successful congress.

According to him, the spirit of unity, which is a prerequisite first step to 2008, is back in the NDC. What is needed next is the forging ahead of all the presidential aspirants in the just ended congress to rally behind Professor Atta Mills, a move he said was 'very vital'.

He said at the Constituency levels, the rank and file have to do more to win more for the party, adding that the Asante Akyem North Constituency has already set itself in motion with a fundraising towards 2008, 'we are poised', he noted.

He called on the National Executive to complement efforts with resources since elections are won from the grassroots.

Alhaji Braimah explained that the country's democratic dispensation has been successful as a result of the NDC's contribution. He said if his party had not started it, the process would not have gotten to its current stage, noting that 'we must all share the successes we have achieved'. He commended the government for the National Health Insurance Scheme (NHIS), which he said was a continuation of the programme started by the NDC.

He indicated that the NDC would have implemented it if it had won the 2000 election. He, however expressed concerned about some few bottlenecks, which he said needed to be corrected.

Alhaji Braimah asked 'all doubting Thomases to join it' and that, 'the authorities should also improve upon the system'.

He was however not happy with some interventions by the government, among them the Poverty Alleviation Fund, which he claimed was not open to all, and called for such programmes to be extended to all Ghanaians.

On the effect the breakaway National Reformed Party (NRP) and the Democratic Freedom Party (DFP) would have on the NDC, Alhaji Braimah, who said it was a major concern, advised the Executive to do well to bring them back since a single vote can make a difference.

He advised the government to desist from doing anything to mar the beauty of elections, but should rather follow the laid-down regulations towards 'a peaceful changeover or a peaceful continuity'.

The NDC Scribe equally had words of advice to his colleagues in the NDC that they should conduct themselves in a civilised manner.

On his part, the Constituency Organizer, Mr. Isaac Kyei Andoh, said before the NDC's congress, people thought the party was going to disintegrate, however the success of it has convinced many people that the NDC is on the way to unseat the NPP.

He claimed that young people, majority of who are supporters of the NPP, have been trouping to his house to be accepted into the fold of the NDC because they now realize that it is a peaceful democratic party.

Mr. Andoh put the figure at about fifty people when he was asked about the number of interested members. He said they had pledged to publicly announce their defection from the NPP on a mounted platform.

He said some people among the lot are even requesting for membership cards of the NDC which he said they would have to apply to the Constituency office, which will in turn accept their applications if they are investigated and found to be genuine seekers of membership.

The Asante Akim Constituency office of the NDC has been closed due to a partial demolition exercise carried out on both sides of the Konongo-Kumasi road for construction work on the road.

Mr. Andoh warned that the NDC would reject applicants who are found to be moles of the NPP.

On the achievements of the NPP as compared to that of the NDC, he said the NPP then in opposition, regarded development projects as not satisfying the ordinary Ghanaian and can therefore, not use that as a yardstick.

He contended that if that were to be a yardstick, development programmes and projects undertaken during the era of the NDC surpass those executed by the NPP.

He faulted the National Health Insurance Scheme's implementation when it was pointed out to him that the NPP had fulfilled its electoral promise by introducing it, with which people have accessed free medical care.

According to him, the NHIS was fraught with a number of shortcomings like Identity Card (ID) holders not being able to access health care in districts other than where they registered.

Mr. Andoh, who admitted he did not have a National Health Insurance ID card, pointed out that he does not because the Scheme is not all embracing.

He said under the Scheme, some drugs are exempted thus making it difficult for people to go and buy drugs prescribed by the medical authorities at the patients own expense.

The NDC Constituency organizer added his voice to the view by the party that the National Youth Employment Programme (NYEP was launched to create jobs for NPP sympathizers.

He claimed that the employment list of the NYEP does not contain Ewe-sounding names but only those supporting the ruling party.

He said the NPP had failed the youth because it had promised the single ones they would get jobs when NPP won to enable them to marry, which to him, has eluded them to date.

He said living condition under the NPP is 'very unbearable', promising that under the government of the NDC, the situation would improve to bring smiles on the faces of Ghanaians.

He said an NDC government would not tolerate corruption but would eradicate it by paying workers well.