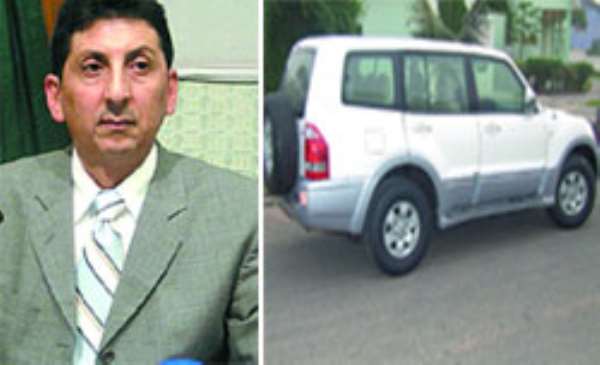 THE MOST dramatic highpoint in the legal row rocking the corporate suites of telecoms giant MTN/AREEBA is the revelation that, the former Managing Director of Areeba Ghana, Mr. Ahmad Farrouk, now on a two-year contract in Nigeria, gave the company's first director/ Company Secretary, Mr. Andreas Hesse, a brand new Mitsubishi Pajero four-wheel drive with registration number GW 3330 X, as inducement to help Areeba undermine and destroy the legal recourse of the Ghanaian shareholder's to the Ghanaian courts for help against the Lebanese plunderers.

A 57-year old Ghanaian village chief, who was the vice chairman and 20 percent shareholder of Areeba has dragged the company to court for restoration of his shares in the company, which he says have been stolen, and now lodged in the belly of the multinational telecom giant, MTN, which has bought over Areeba and its parent company Investcom consortium for a staggering $5.8 billion.

Mr. Hesse, who has suffered countless indignities for nearly ten years, explained to the court in a sworn affidavit that he recently had cause to take a closer look at tonnes of documents in his custody as the company secretary since formation of the company nearly 12 years ago, and discovered shocking evidence of fraud and cover-ups spanning a considerable period, particularly when the issue of sale to MTN came to a head.

Among the insulting conduct was the fact that David, a renowned international legal juggernaut and director of the company, was given twenty euros a day, an economy ticket and asked to share a cheap hotel with the Black Stars supporters group at the recent soccer fiesta in Germany, where areeba organised a promotion to sponsor some fans.

Continuing his story, David said he was forced to make demands of documentation covering his own agreements with the company, which has remained with the Lebanese years after they had been signed and sent to Beirut, the Lebanese capital, the location of the parent company's headquarters.

David's testimony was that he refused to undertake the enterprise, and subsequently created suspicion in his mind and led him to take a closer look at documents he had kept all over the years as Company Secretary and custodian of all minutes, documents, loan agreements which Areeba had filed.

These documents led to a trail of discoveries, principal among them being that the 'so-called debt-equity swap was fraudulent. (Areeba had all along led people to believe that they had reduced the shareholders shares to raise money to hike the value of their shares, resulting in the significant or wiping away of the shares of the shareholders who could not come up with the required cash on demand).

When MTN moved to acquire all of Investcom shares, including that of its subsidiaries Areeba, David demanded copies of agreements he had signed with Areeba from lawyers representing MTN.

According to David Hesse, an English solicitor Mr. Jim McNally from the renowned London city firm Dewey Ballantine, was dispatched to Accra in June 2006 by MTN to conduct independent inquiries into the various claims of shareholders in Areeba.

Additionally, David demanded of Farrouk copies of all company documents particularly the shareholders agreement and David's own documents, but was given only the shares sales and share transfer agreement, leading him to believe that Areeba wanted to take over his shares and interests in Scan construction without paying a dime for it.

Additionally, David revealed that as soon as he intensified his demand for the return of his shares, Investcom consortium, acting through the Group Managing Director Mr. Azmi Mikati, who is barely 30 years of age demanded his resignation from the Board of Directors of Areeba, with the claim that Mr. Trygve Tambusestuen, the then chairman of the Board of Directors and all other directors had resigned except him.

When he refused to resign, Areeba then caused to be e-mailed to him an 'invitation to attend an extraordinary shareholders meeting' to remove him from his directorship.

The invitation itself, David contended was legally defective and failed to comply with the legal requirements for holding such meetings, and contends that the real purpose of the meeting was to remove him alone as a director 'to enable the defendants have a field day', and to shut out David forever.

e. An order that the parties go into account to determine the amount of dividends due to the plaintiff on his shares and an order directed at the defendant to pay such amount to the plaintiff.

Chronicle has learnt that the Serious Fraud Office has begun to take an interest in the matter following press reports.