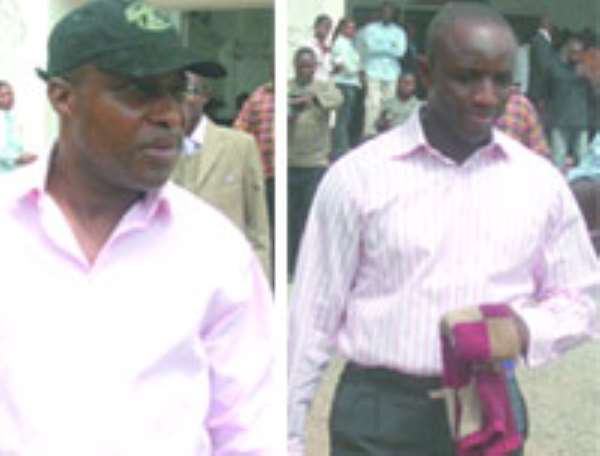 STATE PROSECUTION as well as counsel for accused persons standing trial before the Fast Track Court (FTC) in connection with the missing cocaine saga that rocked the country in the last quarter of last year, yesterday, turned down an opportunity accorded them by the court to further probe the Manhyia Palace's alleged connection to the said missing illicit drug.

“My Lord, no further questions” came the response from counsel on both parties, when the court presided over by Justice J. Dotse inquired whether or not counsel for the state or those of the accused persons had further questions for the prosecutions witness, Detective Inspector Justice Oppong, who appeared before the court to give evidence.

The name of Manhyia Palace popped up, when the presiding judge requested from the witness whether or not investigations had been conducted on the palace, following it being cited by the accused persons in police statements.

“Did you conduct any investigation on Manhyia,” the presiding judge, an Appeal court judge with additional responsibilities as a High Court judge, demanded to know from the prosecution's witness.

In reply, the witness noted that it was for that reason why Alhaji Moro, one of the suspects was roped into the investigations and that the Manhyia Palace had also been investigated.

Meanwhile, the much touted news item aired by the media that former Director of Operations of the Ghana Police Service ACP Kofi Boakye, who was alleged to have played a role in finding the whereabouts of the missing cocaine, would appear in court to give evidence turned out to be a hoax.

The FTC court, packed with audience yearning to hear the ace police officer tell his story looked very disappointed, when the court was adjourned after hearing the evidence of Detective Inspector Oppong.

The accused persons, Kwabena Amaning, alias Tagor and Alhaji Issah Abass are standing trial on four and three counts respectively of dealing in narcotic drugs, conspiracy to deal in prohibited business, namely narcotic drugs, supplying, buying, and crediting, contrary to the laws of the Narcotic Drugs Control Board.

They have pleaded not guilty to the charges; however they had earlier been refused bail and are still in police custody.

The accused persons had earlier been charged together with Victor Kisseh, alias Yaw Billah, Alhaji Moro Mohammed, and Kwabena Acheampong, who are currently serving as prosecution witnesses in the same case.

Giving evidence before the FTC, Detective Inspector Oppong, stationed at the Greater Accra Regional CID as an investigator of the Ghana Police Service noted that the accused persons were arrested on August 2, 2006 based on the instructions of the Attorney General, for dealing in Narcotic drug before the Georgina Woode Committee, commissioned to investigate the missing cocaine could complete its work.

According to the witness, the Director General of the police CID, David Asante Apeatu authorized him to conduct investigations on the accused persons.

Witness, who was led in evidence by Mr. William Pobi, Principal State Attorney, categorically mentioned that the accused persons voluntarily gave their statements to the police in the presence of their counsel, Messrs Gabby Otchere Darko and Mohammed Atta respectively, in addition to an independent witness, one Godwin Nubiako.

Reading the police statements of the accused persons in court, witness suggested that Tagor, having denied engaging in cocaine business made mention of a meeting held in ACP Kofi Aboakye's residence about the missing cocaine on the high seas, where the ACP entreated them to put their ears to the ground in search of the missing stuff.

Continuing, witness noted that Alhaji Abass, who also denied dealing in drugs, was also interrogated by ACP Boakye, who noted that Tagor had informed him of the illicit drug being sent to Manhyia for safe keeping.

Witness further told the court that apart from interrogating the accused person, he conducted a thorough search in their various houses but could not chance on any drug.

He therefore indicated that much needs to be done since investigations were aborted at a stage to await the Georgina Woode Committee reports due to public outcry coupled with accused counsel not cooperating with the police.

Witness noted that after the committee report was released, investigation continued until the accused persons were arraigned before the court.

In a cross-examination, Mr. Ellis Owusu Fordjour, lead counsel for Tagor, questioned the witness, who had 25 years experience up his sleeves as an investigator, to disclose who authorized him to stop the investigations on the case. This question produced no direct response, as witness emphatically told the court that he would not like to mention any name.

Witness, additionally noted that the docket on the case was taken away from him and sent to the Police CID Headquarters after the Wood Committee report came out.

Detective Inspector Oppong in a further cross-examination from Mr. Mohammed Atta, counsel for Alhaji Abass, could not readily say when the docket was sent to the Headquarters but managed to state periods between three to four weeks.

Additionally, witness indicated, he took statement from ACP Kofi Boakye as he became a common personality being mentioned by the suspects.

The facts as presented by the prosecution noted that on or about April 26 2006, the vessel M.V. Benjamin (a.k.a. Adede 2), anchored in Tema breakwaters, where 76 out of its total of 77 parcels of cocaine were offloaded into two canoes, which landed at the Kpone beach in the Greater Accra Region.

According to the prosecution, news of the missing 76 parcels of cocaine broke and spread like wildfire in the underworld, leading to the security agencies also having wind of it and subsequently, investigations conducted with the then Director of Operations of the Ghana Police Service, ACP Kofi Boakye, inviting the accused persons to a meeting in his house in relation to the issue.

At the meeting, the accused persons, prosecution intimated, voluntarily confessed their dealings in narcotic drugs and even boasted openly about previous activities relating to narcotic drugs.

The accused persons were also alleged to have settled old scores and disputes at the meeting held.

These conversations during the meeting, according to prosecution, were recorded stressing that the accused persons at the meeting also agreed to locate the 76 parcels, which they would seize and share among themselves.

Prosecution, were of the conviction that the accused persons are self-confessed drug barons, who from at least 2004 have actively been engaged in undertaking activities for the purposes of establishing and promoting various enterprises relating to narcotic drugs and would therefore lead evidence to show that.

The case had been adjourned to January 30, 2007 for continuation.