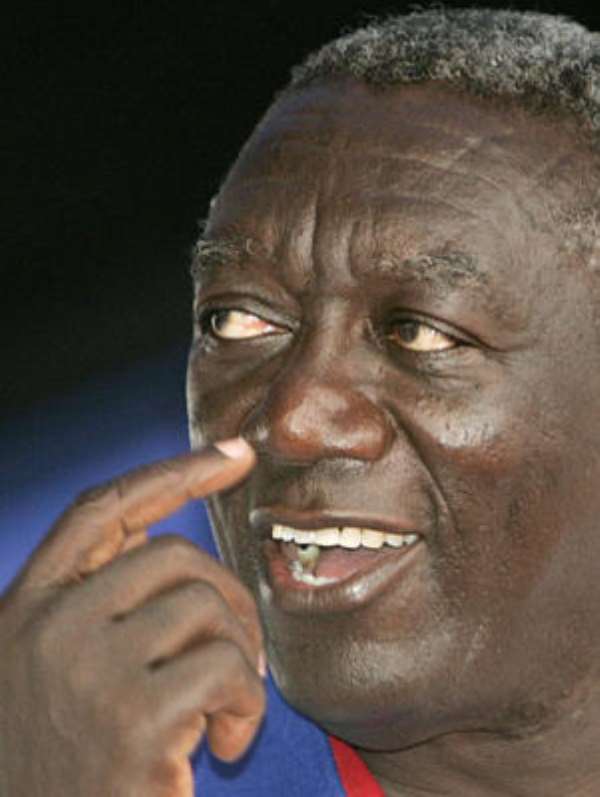 President Kufuor could not hold back his words when he was pushed to the wall on the issue of corruption, which his government has been making fat claims of fighting.

At the much-publicised 'Jubilee People's Assembly' in Sunyani, the Brong Ahafo regional capital yesterday, the president noted that as far as he was concerned his hands are clean when it comes to the issue of corruption.

Equally, he noted that there was no way that he would sit in laxity for any of his ministers to chop and pine at the expense of the nation.

Should any of his minister be found in any such corrupt acts, he stressed that he would not hesitate to kick him out and allow the rule of law to take its due course.

He therefore noted that neither he nor any member of his government has ever dipped his hands into state coffers to amass wealth to themselves.

This was when a man claiming to be an Evangelist had invoked a curse on any member of government who might have dipped his hands into state coffers.

There and then, the President swore heaven and earth that he and men are clean.

Keeping faith with himself, President Kufuor revoked the curse and said, “Our hands are clean”.

After going through the rigorous in-house scrutiny at the NPP's annual conference in Koforidua a few days ago, President Kufuor again gave a fair account of his stewardship over the last 7years since he assumed the high office of the presidency.

He gave a detailed account of what his government has been able to achieve within the period that the country's mandate was entrusted in their care.

He talked of how his government has been able to turn the economy round within the limited time frame that it took over the reigns of government from the NDC government.

Chief among his governments list of achievements, the President said was the fact that they have been able to stabilise the economy.

In spite of the external shocks, he pointed that the government has been able to stabilise the Cedi against almost all the country's major trading currencies, with specific reference to the United States dollar which's exchange rate has remained stable for sometime now.

The President also mentioned that completed and ongoing road construction and other projects across the length and breadth of the country gives a clear indication of the level of development that is taking place.

He also talked of the low interest rate as something that is worth commending of his government since according to him, it is a sign of good management.

These and others he said should inspire fellow Ghanaians of the sound principles and policies of his government, which he says is being complemented by the country's foreign compatriots.

Surrounded by his lieutenants who aided him answer some questions, President Kufuor took time to explain to Ghanaians the various initiatives and decisions that his government have had to undertake and defended them.

From the issue of the national identification card, through to the capitation grant, and that of some 44 Ghanaians who are alleged to have been killed in the Gambia republic, he took his time to give a fair explanation of what he and his government has been doing to alleviate the sufferings of Ghanaians.

On the thorny Gambia issue, Foreign Affairs Minister, Nana Addo Dankwah Akuffo Addo noted that government has been liasing with the government of that country to find out the perpetrators of that act in order to bring them to book.

Though the Gambia government and police has promised to corporate with their Ghanaian counterparts in unravel the secret behind the killings, the Foreign Minister noted that the seem to be dragging their feet.

That notwithstanding he stressed that the issue has not been swept under the carpet since is duty bound to protect all Ghanaian nationals including those alleged to have been killed.

The President assured that he was going to task the Board of the Student Loan Trust to look into the student loan issue with immediate effect to since it is suffering some setbacks.

With the scrapping of the SSNIT loan scheme, which has suffered a level of abuse, the sector Minister Paapa Owusu Ankomah noted that there would be a better replacement to enable students access the facility.

Whilst appreciating the fact that hard working as Ghanaian workers are their salaries are still not sufficient, the President asked Ghanaians to keep faith with him, since he has plans to better their lives, emphasising that the Fair Wages Commission would do more to alleviate the suffering of Ghanaians.

With about 50 clear days to the celebration of the country's fiftieth independence anniversary, the president sought to whip up support for the programme line up and stressed the need for each and every Ghanaian to appreciate the event.

He urged Ghanaians no matter ones political on ethnic background celebration of the country's 50th independence, which he said is significant for the government and people of this country, saying, “we must all shelve all doubts and misgivings about the celebration”.

“The economy is on the path of fast recovery” he said stressing that all indicators point to success.

According to him, the negative attitudes of some Ghanaians in painting the country black to the public is gradually engendering investor confidence in the country hence must begin telling the true story of Ghana to the outside world.

The President takes solace in the significant feat chalked by the senior national team, the Black Stars at the just ended world cup in which they staged a sterling performance, placing Ghana on a high pedestal.

He thus urged all Ghanaians to believe in themselves as the country gears up for the celebration of yet another significant feat come 6th March 2007 when Ghana would mark 50years of independence, which he said is no mean achievement.