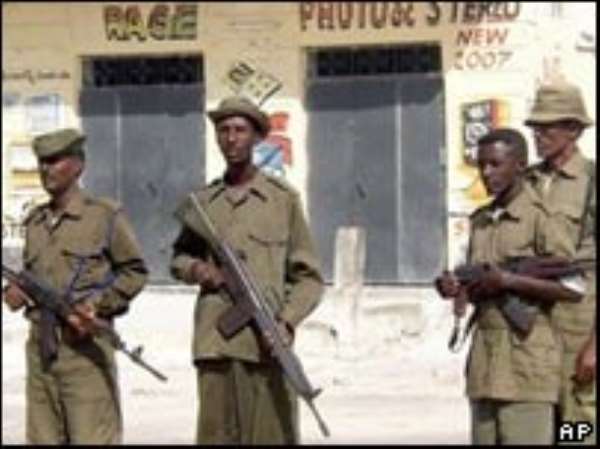 Mwai Kibaki, head of a regional body, is hoping for an 8,000-strong force.

It would replace Ethiopian troops who helped Somalia's government oust an Islamist militia but whose presence, analysts say, may hinder lasting peace.

A delegation from the African Union has arrived in Somalia's capital, Mogadishu, with the deployment of peacekeepers also high on its agenda.

So far only Uganda has offered troops - 1,500 - although it needs parliamentary approval.

Our correspondent also says that Aids is eroding the continent's ability to provide troops for peacekeeping operations at a time when its many wars are placing increased demands on armies.

The disease has left armies with vacant posts and units operating below strength, he says.

Ethiopia wants to withdraw its soldiers from Somalia within weeks.

However, the nation remains dangerously volatile with remnants of the Islamist militia still at large.

It became one of the world's most dangerous cities following the ousting of former leader Muhammad Siad Barre in 1991 although the Union of Islamic Courts' six-month rule restored some order.

The interim government and Ethiopian troops are continuing searches for weapons in the capital.

African Union officials are in Mogadishu to discuss peacekeeping at the invitation of Somalia's interim government.

It is unlikely members will agree to send peacekeepers unless fighting has halted, analysts say.

Martial law will allow the president to issue decrees on matters of national security, bans unlawful demonstrations and outlaws the spreading of propaganda.