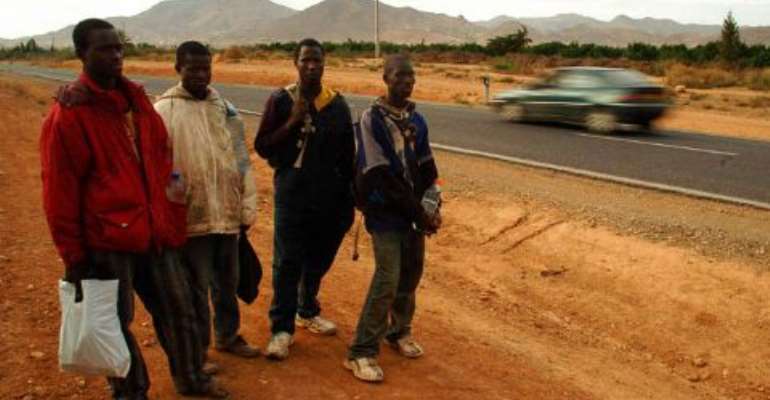 GHANAIANS are not the only people who sometimes face expulsion from other countries.Foreigners who violate Ghana's immigration laws are also expelled.

Immigration service statistics made available to the Times indicate that between January and September last year, a total of 134 foreigners were repatriated from Ghana for overstaying or entering the country illegally, or working without work permits. The expulsions affected 69 Nigerians, 31 Ivorians, six Chinese, three Indians and three Dutch.

There were also two each from Britain, Benin, Togo, Burkina Faso and Chile and one each from Belgium, Italy, Philippines, Sri-Lanka, Cameroon, Morocco, Guinea, Iraq, Congo, Liberia, Denmark and Germany.

Edward Baffoe-Bonnie, Deputy Public Relations Officer of the Ghana Immigration Service, said in an interview on Tuesday that like any other country, Ghana's laws require that every foreigner or immigrant obtain permit before possibly entering the country.
However, he said, some people either enter the country illegally or stay beyond the stipulated period given them.

He said a permit may be renewed or extended on application by the visitor based on reasonable grounds.

Mr. Baffoe-Bonnie said ECOWAS citizens are given 90 days grace period to stay while all other nationals are allowed 60 days but in all cases, applicants are critically assessed to ensure that they meet the resident requirements.

He said that with the introduction of the border patrol units, the Immigration Service is intensifying its effort to stop illegal immigrants from using unapproved routes to enter the country, stressing that people should not take undue advantage of the peace and stability Ghana is enjoying to enter the country illegally.

US$170 million Judgment Debt: Prosecute signatories to GPGC ...
20 minutes ago

Accra: Dumsor timetable for 22 days out
22 minutes ago