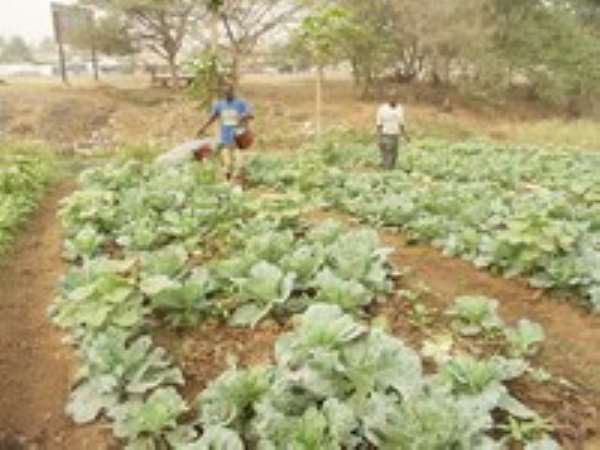 STREET foods, consumed regularly by low income residents of towns because of pressure of time, are a source of great potential danger to health Prof. Jacob Sangsore, Dean of the School of Research and Graduate Studies, has said.

He said more low-income people have taken to the consumption of fresh raw vegetables such as carrots and cabbages and vegetable salads sold with street foods.

Contributing to a panel discussion at the just-ended New Year School, Prof. Sangsore said research indicated that raw vegetables contain pathogenic bacteria, viruses, worms, fungi, and high level of faecal pollution found along the banks of the drains used for watering the vegetables.

He said research, he conducted in 2003, on 'Promoting Urban Food and Nutrition Security for the vulnerable in the Accra Metropolitan Area' found that as a result of the water used by the garners the level of microbial contamination is unacceptably high.

'Five out of seven sample areas in one study had faecal coliform counts in excess of the acceptable maximum value,' he noted.

He said many poor people who ate such raw vegetables ended up with diarrhoea and other stomach upsets, some of which resulted in fatalities.

On the environment and health, Prof. Sangsore said mosquitoes, house flies, cockroaches, bed bugs and lice are the most dangerous range of insect related pests that continue to bother people.
He said houseflies constitute a great health hazard, given the unsanitary conditions in the settlements especially in poorer areas of towns and cities.

Prof. Sangsore called for an efficient, and well-organised administrative mechanism involving all stakeholders, and backed by adequate and well managed financial resources to tackle the problem of waste management.

He said even though funds are transferred to the metropolitan, municipal, and district assemblies under the District Assemblies Common Fund, to solve waste disposal problems, these problems persist.

'The financial problems of the assemblies are made worse since charges for services are kept to the minimum and sometimes not enforced for political and social reasons,' he emphasized.
He said good urban planning is what is needed to reduce the problems of sanitation, refuse disposal, poor water supply, and other health-related problems.
Prof. Sangsore said post–independence governments generally followed the same policies of supporting housing development for the privileged, leaving the urban poor in the hands of slum landlords, who are converting the limited toilet facilities into rental units, thereby exacerbating the poor environmental and housing conditions of the poor.
He said a Draft National Environmental Sanitation Policy, which aims at developing and maintaining a clean, safe and pleasant physical environment in all human settlements, has been submitted to government.

Prof. Sangsore said it is anticipated that, by adopting the strategies outlined in the policy document, Ghanaians should be able to enjoy better environmental health by 2020.